Billy (Scott Wolf), Jimmy (Mark Dacascos), and Marian (Alyssa Milano) sneak into Shuko’s (Robert Patrick) headquarters to try to secretly steal his half of the medallion, but their attempt fails and they are discovered. Shuko manages to capture Jimmy while Billy and Marian escape back to the Power Corps’ hideout. Shuko later tells Jimmy that he was the one who killed his and Billy’s father. They were colleagues in Changsa, and there they found the half of the medallion that Shuko now possessed. Shuko wanted to unite the medallion and use its power, but their father disagreed with that, so Shuko killed him so he wouldn’t be able to stop him from accomplishing that goal.

Shuko leads the gangs in an attack on the Power Corps’ hideout, and he – in Jimmy’s body – confronts and fights Billy to get the other half of the medallion from him. During the battle, Billy loses his half, and Shuko exits Jimmy’s body and grabs it. He unites the halves and becomes an all-powerful being. He then removes all light from the entire city, then splits into two katana-wielding demons and goes after Billy and Jimmy.

Bo Abobo (Henry Kingi) tells Marian to get the lights in the hideout back on, since he knows Shuko has an aversion to light. Marian gets the generator running, restoring the lights and blinding Shuko. The brothers beat up Shuko’s demon forms until they rejoin into his original form, and the medallion splits apart, with both halves landing in Billy and Jimmy’s hands. They join the halves and turn into warriors, and the spirit of Satori (Julia Nickson) appears and tells them that they are now the guardians of the medallion.

The brothers then beat up Shuko, and Jimmy uses his half of the medallion to enter Shuko’s body just as Marian’s police chief father (Leon Russom) shows up. Jimmy, as Shuko, tells the chief that he’s giving his entire fortune to the police force, and writes him a check for it, and then allows himself to be arrested. Jimmy then leaves Shuko’s body as an army of cops shows up, and Shuko is taken to jail and the gangs are arrested.

The brothers pledge to help rebuild New Angeles and keep the medallion safe from evil. 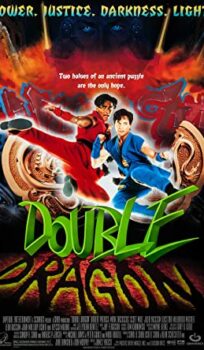