In what may be the collision of moviedom’s two most despicable characters ever, Phyllis (Barbara Stanwick) admits that she was just using Neff (Fred MacMurray) to get him to kill her husband, shoots Neff (winging him in the shoulder), and then realizes that she actually loves him. Neff knows that they’re both unredeemable, so he shoots and kills her, and returns to his office to record his story. Keyes (Edward G. Robinson) arrives to hear the end of the confession, and calls an ambulance (with police). Neff attempts to make a break for the Mexican border, but collapses before he gets out the door. The viewer is left to wonder whether he’ll bleed to death before the ambulance arrives, or whether they’ll patch him up so he “can walk into the gas chamber at San Quentin on his own power.” 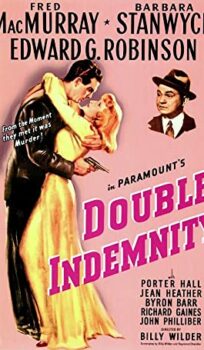