While in Stavros’ (Mickey Rourke) captivity in Rome, Kathryn (Natacha Lindinger) goes into labor and gets taken into the lower levels of a hospital, and Dr. Trifioli (Valeria Cavalli) – who is working for Stavros – successfully deliver hers and Jack’s (Jean-Claude Van Damme) son. As Jack and Yaz (Dennis Rodman) arrive outside the hospital, one of Stavros’s goons alerts him to this, so he orders the goon to give him sixty seconds to escape and then kill both Kathryn and Trifioli, and then he takes off with the baby. When the goon tries to carry out the order, Trifioli ends up pulling out a gun and shoots him dead. Jack enters the room a short time later, but after realizing that Stavros and his son are gone, he demands for Trifioli to tell him where they are, and she replies that she knows of their location. Yaz then comes in and promises Jack that he will take care of Kathryn while he goes to save his son.

Jack finds Stavros in the center of an amphitheater with his son in a basket surrounded by a bunch of small crosses staked into the ground, and one of Stavros’ underlings forces him to drop his handgun. Stavros offers Jack a chance to save his son, and says that, if he fails, he will raise his son as his own. He then unleashes a tiger and informs Jack that the crosses mark where he has placed mines. As the tiger looks to threaten the baby, Yaz comes in on a motorbike and snatches up the basket. Jack then leads the tiger on a chase throughout the building, and after Yaz speeds around the arena a bit more, he puts the baby in a safe place and then sets out to find Jack. Jack manages to get the tiger temporarily off of his tail, and after Yaz shows up, he tells him to tend to his son while he sees to Stavros.

Jack finds Stavros in the arena and dukes it out with him, and Yaz returns again to help, but only narrowly avoids getting killed by a mine. Jack eventually steps on a mine’s location, and Stavros thinks that he has the battle won, but then he puts his foot down on an unmarked mine. Yaz reveals that, during his earlier extra bit of speeding around the arena, he moved a couple of the markers, and Jack discovers that his spot is safe. The tiger then runs back in, so Jack and Yaz retreat to collect the baby, and they find him being cradled by the Colony agent Goldsmythe (Paul Freeman), who gives him back to Jack. Considering himself beaten, Stavros tearfully lifts his foot off of the mine just as the tiger leaps at him, and the blast kills them both and destroys the amphitheater. The good guys survive by shielding themselves behind a vending machine.

After Jack loads his son into a car, Goldsmythe pulls out a gun and demands that Jack hand over his shirt and a lock of his hair so he can “remember his Roman holiday.” Yaz tells Goldsmythe that he can have his lucky coin and tosses it at him. It lands on the ground and activates a hidden smoke bomb, giving Jack the chance to escape with his son. Not the least bit upset about it, Goldsmythe says goodbye to Yaz and leaves, and Yaz looks at the ruined amphitheater believing that he will get the blame for it and wonders what the fine will be. 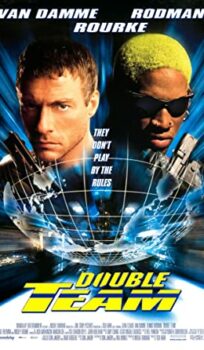