Father Flynn (Philip Seymour Hoffman) threatens to have Sister Aloysius (Meryl Streep) removed from the parish for investigating into whether or not he behaved inappropriately with Donald Miller, a student. Sister Aloysius says that she knows for certain that Flynn is a pedophile because she called his previous parish and spoke with a nun about why he had been transferred away. Flynn is incredulous and denies it, but Sister Aloysius insists that she has proof and will not rest until she gets a parent to come forward about Father Flynn and he is removed from the church.

Father Flynn leaves the parish. In moving him to another location, the church actually gives him a promotion.

Sister James (Amy Adams) returns from visiting her sick brother and meets with Sister Aloysius, who reveals that she had never made any phone call to Father Flynn’s previous parish as she had claimed. She had lied, reasoning that if Father Flynn hadn’t been guilty he would have had nothing to worry about. Her instincts were proof enough for her. Sister James says that she wishes she could be as certain of things as Sister Aloysius, who uncharacteristically bursts into tears upon hearing this. She reveals to Sister James that she is plagued by doubt after all …

Whether or not Father Flynn was guilty or the victim of a “witch hunt” is left open for interpretation.

It is of note that John Patrick Shanley, who wrote both the play and the screenplay adaptation, decided whether or not Father Flynn was guilty. He only revealed the answer to the actor who played Flynn on stage, and then again to Philip Seymour Hoffman for the film. They are the only people who know for sure. 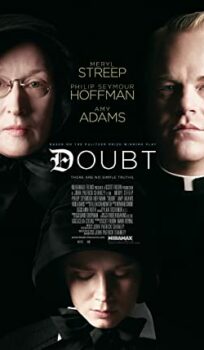