SHORT VERSION:
Phil’s son Brady wins the Pinewood Derby, beating Ace’s son A.J. (whose car was designed by Ace himself and is faster than the car he made in his youth that set a world record for being the fastest miniature racing car) in the process and giving his family their first victory in years. The victory is then made even sweeter when it is announced that Brady also broke Ace’s world record. Afterwards, Ace goes up to Brady and his family with his wife and A.J. and he congratulates Brady on becoming champion, but just after he steps outside the room, he throws a tantrum like a petulant child, which everyone hears.

LONG VERSION:
Kim (Lauren Holly) eventually reaches her limit with Phil (Greg Germann) and his obsession with beating Ace (Marc Raymond) through creating the perfect miniature racing car for their son Brady (Adam Hicks) to use to defeat Ace’s son A.J. (Eric Jacobs) at the upcoming Pinewood Derby, so she decides to take Brady and go to her parents’ house for a few days (the spouses and sons of Phil’s friends Big Jimmy [Perry Anzilotti] and Blaine [Ross Brockley] also decide to take time away from them because of their own obsessions with defeating Ace). Just before she heads out the door, Phil’s advertising agency co-worker Larry (Sandy Hackett) shows up with Uno Yakimoto (Pat Morita) and his son Kyosho (Joey Miyashima) of Yakimoto Technology & Communications in order to hear the advertising campaign ideas Phil was supposed to have prepared for them. However, Phil has nothing ready at all, and out of sheer desperation, he pitches an idea for a new type of cell phone using the miniature cars he made. Fortunately for him, the Yakimotos love it, securing the agency the account with the company.

Later that day, the curious Big Jimmy and Blaine come over to Phil’s house and discover the practice tracks and cars that he made. After Phil mentions that the fastest car he has can reach the finish line in 3.25 seconds, Big Jimmy informs him that he discovered that Ace has already built a faster car, and he shows him that the Pinewood Derby Bible that they have been reading from was written by Ace himself. Big Jimmy then shows Phil a picture of Ace’s car in the book and explains that Ace made it when he was eight years old and it set the Pinewood Derby’s world record for being the fastest miniature car, and Ace still holds that record today (and though he and Blaine apparently believe that Ace will have A.J. use that car at the competition, neither are aware that Ace is making a new car for his son that can go faster than that). Phil goes nuts, believing that all of his work was for nothing, but Big Jimmy and Blaine restrain him and the former says that they figured out a way to beat Ace. He explains that they will break into Ace’s house tomorrow while he and his family are out and steal the car from his upstairs trophy room, then take it back to Phil’s house and reverse engineer it so they can create their own perfect car, and then return Ace’s car to its original place and get out before the family gets back. The next morning, they enact their plan and succeed with every step of it until Phil and Blaine are in the midst of returning it, for Ace and his family return home while they are still in the house. However, they are able to escape without being identified despite a few close calls (though Phil’s chance doesn’t come until after Ace and his family have gone to bed that night). The next day, the trio craft their own version of Ace’s car with assistance from a how-to video by Claude (Robert Costanzo), a famous handyman whose son was a former Pinewood Derby champion, and when they race it, they discover it is fast enough to beat the world record. However, that night, Ace races his new car and it turns out to be even faster than theirs.

On the day of the Derby, Big Jimmy and Blaine decide to let Phil and Brady use the car, saying that Phil ought to have the pleasure of beating Ace more than any of them. When they get to the site of the competition, they find their wives waiting for them, and Phil speaks to Kim alone. Phil tells her about his success in landing the Yakimoto ad campaign, and she soon tells him that Brady has been working on his own car for the last two days with her father’s neighbor giving him pointers on its design. Phil protests this and shows her the car he brought and complains about how he spent a lot of time on it, but Kim indirectly tells him that he needs to let Brady race his own car, for it might just be better than that, and then she leaves to go sit with Brady. Suddenly, Phil notices one of the other fathers getting ejected from the event, and Big Jimmy and Blaine following behind him. They tell Phil that the man got disqualified for designing a car and then hiring a boy to pose as his son so he could race it in the Derby, and he did this because he didn’t have a son of his own but mainly because his own father never let him make his own car. When the final call for race entry is announced, Phil decides that he can’t be that kind of a father, so he tells the guys that he isn’t racing the car. Big Jimmy takes it and gives it to his own son to use.

Brady’s car, Big Jimmy’s car, and Ace’s car are among the final six contenders in the last race, and when the cars are let loose, Brady’s car crosses the finish line first, giving himself and his family their first victory in years. The victory is then made even sweeter when it is announced that Brady has also broken Ace’s world record. Soon after, Ace and his family go over to Brady and his family, and Ace congratulates Brady on becoming champion. However, the moment he steps outside the room, he throws a tantrum like a petulant child, which everyone hears. Phil expresses his pride to Brady, and he asks him if he really did build that car on his own. Brady assures him that he did, but he repeats what Kim said about his grandfather’s neighbor giving him some pointers during the process. He then points out that very neighbor over in the opposite stands, who turns out to be Claude.

After the credits roll, the final scene takes place one year later in the Yakimoto homestead. Kyosho has now become obsessed with creating the perfect miniature car himself and gives his son cash to distract him so he can make the car for him, just like Phil, Blaine, and Big Jimmy did with their sons. 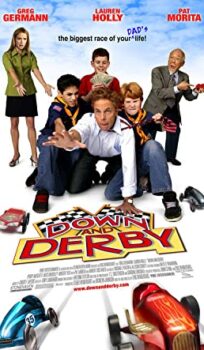