SHORT VERSION:
Though R. Adm. Graham does everything he can to prevent Lt. Cdr. Dodge and his crew on the Stingray from winning the naval wargame, including taking command of the pursuing submarine Orlando during the later stages, the Stingray wins when it reaches Norfolk and blasts the naval station dummy ship in the harbor with the two torpedoes provided by V. Adm. Winslow.

After both submarines return to port, Winslow confronts Graham and informs him that, since he found out that he earlier cut the containment area for the wargame in half without his authorization, he can forget about being promoted to Vice Admiral. Winslow then meets up with Dodge and his crew, and he tells Dodge that he will not be giving him command of a Los Angeles-class nuclear submarine, but the command of a more advanced Seawolf-class submarine instead. He also says that he will be given a proper crew on it, but Dodge refuses to take command of this new sub unless his present crew is transferred there with him, feeling that he would not be in line for such a promotion without their help, and Winslow accepts this. After Dodge dismisses the crew for their shore leave, Lt. Lake – whom he is nurturing a mutual romantic connection with – asks him to tell her about the embarrassing genital tattoo he received as an Ensign, so he proceeds to tell her the story as they walk off together.

LONG VERSION:
After Lt. Cdr. Dodge (Kelsey Grammer) and his misfit crew on the Stingray successfully make it to Charleston Harbor, R. Adm. Graham (Bruce Dern) – not wanting to see Dodge emerge victorious – decides to cut the naval wargame’s containment area in half without authorization from V. Adm. Winslow (Rip Torn), and he informs Dodge of this change over the radio.

Later, Lt. Pascal (Rob Schneider) reaches his breaking point with Dodge’s unorthodox style of command and his violation of certain parameters of the wargame that have been set by Graham, so he directly accuses Dodge of hijacking his own submarine and asks that he relinquish command of it to him. Dodge allows Pascal to use the P.A. system to put forth this decision of his to the crew, but no one supports him on it because he isn’t respected by any of them. Pascal is thus convicted of attempted mutiny and then made to “walk the plank” blindfolded while Dodge and the other crew members dress and behave like pirates, but he and his belongings just get sent into the net of a fishing trawler that Dodge contacted that will take him back to shore. After Winslow and Graham get wind of this, Graham tells Winslow that Dodge has let this wargame get out of hand, but he believes that Dodge has pushed things as far as he has because he is planning to make a run on Norfolk itself. He then tells Winslow that he will be going to Norfolk to take charge of Dodge’s capture personally, and the next day, he flies out to the Orlando – the pursuing submarine captained by Cdr. Knox (William H. Macy) – and takes command of it.

Dodge and his crew find Norfolk blockaded with battleships and aircraft, and all of their sonars are active along with ocean floor sensors, plus the Orlando is waiting for them as well. After finding out that the Denali, a commercial supertanker, is among the fleet, Dodge comes up with a plan to both avoid detection and get a head start on his opponents by having the Stingray steered towards the Denali and then sent into the cavitation between the propellers until it goes right under the tanker, where it will stay until it can clear the blockade. Lt. Lake (Lauren Holly) refuses to take charge of the steering, her confidence shaken by a previous botched dive attempt that nearly caused defeat for the Stingray, so Dodge agrees to take care of it for her. However, he deliberately gives incorrect instructions so Lake will have no choice but to step up and resume control of the steering, and as they come up right behind one of the propellers, she does as he expected and has the crew get the sub to where Dodge wants it to be. Later on, Lake speaks with Dodge in private and kisses him to thank him for restoring her confidence.

Sometime afterwards, the Denali starts to turn away from Norfolk, and after receiving word of this, Dodge decides that – due to them having a lead on the Orlando and having gone past the surface ships, plus looking and seeing through the periscope that the planes will have trouble spotting them due to cloud cover up in the sky – they are going to surface and make the run on Norfolk now. Once the Orlando detects the Stingray, Graham announces to the Orlando’s crew that he has the conn, so fiercely determined is he to keep Dodge from winning. As the Orlando surfaces and starts to close in on the Stingray, Graham looks for a shooting solution, and he radios Dodge and tells him that he must acknowledge when he has found one. Dodge responds by verbally knocking him before telling him to catch them if he can. Dodge has the two torpedoes given to him by Winslow armed and fired at the naval station dummy ship in the harbor, and though Graham tells Dodge moments later that he has just found a shooting solution, Dodge lets him know that he has already fired his torpedoes, so if they hit their target, he and his crew will win. The torpedoes then blast the dummy ship, giving the Stingray the victory.

After both submarines return to port, Winslow meets up with Graham and informs him that, since he reduced the size of the containment area without proper authorization, he can forget about being promoted to Vice Admiral. Winslow then meets up with Dodge and the Stingray’s crew, and he tells Dodge that he will not be giving him command of a Los Angeles-class nuclear submarine, but the command of a more advanced Seawolf-class submarine instead. He also says that he will be given a proper crew on this new vessel, but Dodge refuses to take command of it unless his present crew is transferred there with him, feeling that he would not be in line for such a promotion without their help. Winslow accepts this, and he reveals that Dodge’s rebellious crewman Stepanek (Bradford Tatum) is actually his son; Stepanek is his mother’s surname. However, Stepanek gives his father a proper salute since the exercise has caused him to have a change of heart about being in the Navy. After Dodge dismisses the crew for their well-earned shore leave, Lake asks him to tell her about the embarrassing genital tattoo he received as an Ensign, so he begins to tell her the story as they walk off with his arm around her. 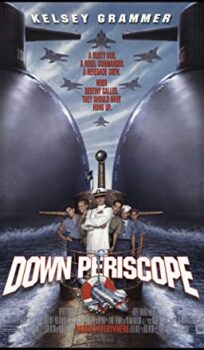