Nancy (Maria Bello) puts on the dress she wants to die in, takes off her jewelry, tossing it on the table.  Her arms are very visibly scared from cutting.  She comes out of the bathroom and asks if Louis (Jason Patric) wants to have sex with her in the dress, to which he replies he would, and they start kissing on the bed.  In the midst of making out she asks if he’d like to kill her in the dress and he says no.  He tells her that he loves her and that he doesn’t want to kill her now that their relationship is real and not just via the internet.

She yells at him about how he agreed to do murder her, how she’s in so much terrible pain, and how he doesn’t know what love is.  In the course of the argument he pushes her down on the bed and begins to choke her.  He yells at her about this being what she wants but stops, leaving her coughing but alive.  She cries and coughs and gets off the bed, lying on the floor as he stands at the dresser with his back to her.

As she cries on the floor, he turns and bends down over her, touching her tenderly and then puts his hands around her neck and strangles her gently until she’s dead.  He then takes off his shirt and cuddles up next to her lifeless body.

We then see him disposing of her body on a snowy night, crying.

Then it moves to her husband Albert (Rufus Sewell), alone in the house, looking at her various things (bobby pin, cds, kitchen items, bedding, etc.).  In voiceover he has a conversation where he confesses that he knew she needed help/had problems and basically ignored her pain, that he could have prevented her death.  At the kitchen table he’s reading her emails and we hear Nancy’s voice in an email to Louis telling him that she tried to make love to her husband that day but couldn’t and that she doesn’t know why people even get married.  She tells Louis she’ll be dreaming about him when she goes to sleep.

Following that, the screen goes to black and the words, “Inspired by true events,” come up. 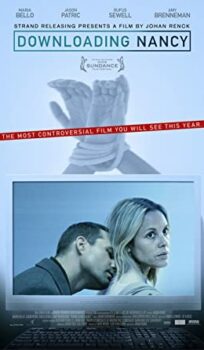