In the future, Norwegian scientists establish the process of downsizing, in which people are shrunken to five inches to prevent overpopulation and excessive waste.

Paul Safranek (Matt Damon) decides to go through with it so that his money will be worth more in the small community of Leisureland. However, Paul’s wife Audrey (Kristen Wiig) backs out at the last minute, and they divorce. Paul befriends his neighbor, a partygoer named Dusan (Christoph Waltz), and he meets and falls in love with Ngoc Lan Tran (Hong Chau), a Vietnamese activist who was involuntarily downsized and was smuggled to the United States.

Paul and his friends travel to Norway to meet Dr. Jorgen Asbjornsen (Rolf Lassgård), the man who helped establish downsizing. He tells the group that humanity is on the verge of extinction, and he has created a vault for several downsized people to be preserved in. Although Paul wants to join them in the vault, he decides to stay in Leisureland with his friends to help others as he always wanted to. 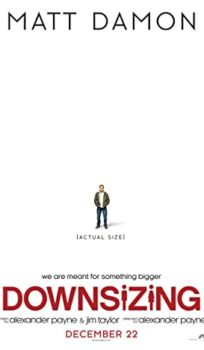