SHORT VERSION:
After showing Sarah video proof that he and Helen Hyde are one and the same, Richard gets to work on creating an antidote with her help, and he finds one that will break down Helen’s chromosome chain (which is separate from his) and allow him to regain full control of his body. He then ties himself down and gives Sarah a needle filled with the formula, telling her that she has a 45-minute window to get the formula into Helen when he first turns into her, because any longer and the transformation will be permanent. He turns into Helen soon after, and Sarah only gets some of the formula into her before Helen causes a series of events that enables her to escape Richard’s apartment, and she heads for the party Omage is holding for her new Indulge fragrance (which she stole from Richard).

Sarah follows her there, and during the commercial presentation for the fragrance, Sarah surprises Helen and injects the rest of the formula into her, and she turns back into Richard for good in front of everyone. Richard explains how he and Helen were one and the same and that the fragrance was really his creation. His bosses Mintz and Unterveldt end up making him a partner in the company and give him his own laboratory, but he tells them he won’t be able to start for three weeks because he will be on his honeymoon with Sarah. He and Sarah then kiss to close out the movie.

LONG VERSION:
One day, Richard (Tim Daly) wakes up from another Helen Hyde (Sean Young) episode and finds a videotape next to him. He plays it and discovers that it is a recording that Helen made, and she tells him that she knows that he had earlier attempted to expose how he and she were one and the same. She then burns all of his papers talking about the formula while also informing him that she has deleted every file on his computer’s hard drive containing his research on it, and warns that it will only be a matter of time before she takes over completely. She lastly adds that she took his perfume and plans to have it marketed as her own. Richard checks his data on the transformations and how long they last, and through it realizes that he has indeed been spending more time as Helen than as himself and that he will become Helen permanently at the rate he is going. He heads to the Omage building and interrupts a meeting with Mrs. Unterveldt (Polly Bergen) and the rest of the board of directors as they are discussing Helen’s fragrance to tell them that it is his creation, but he is thrown out.

After another failed attempt to show himself transforming into Helen, Richard steals a tape from the lab’s security room that recorded the first time he turned into Helen, and he shows it to his fiancée Sarah (Lysette Anthony) to finally convince her that he is Helen. After finding a disk containing the formula that Helen did not find and destroy, he gets to work on trying to create an antidote with Sarah’s help (he believes Helen destroyed everything else because it contained a way to reverse the process). He successfully creates one that is designed to break down Helen’s chromosome chain, which is separate from his, and this will enable him to fully regain control of his body. He then has Sarah strap him down to their bed and tells her that she has a 45-minute window to get every drop of the formula into him when he first becomes Helen, because if she waits any longer or doesn’t get all of it into him, the transformation will be permanent. His changeover begins soon after, and Sarah only gets a partial amount of the formula into Helen before she knocks her off-balance and accidentally starts a fire. Helen convinces Sarah to let her loose, saying that if she dies, so will Richard. Once freed, she strikes Sarah and runs out of the apartment, then steals a car and drives off towards the party Omage is holding for her Indulge fragrance. Sarah follows in a taxi cab.

A short time into the party (where Helen’s appearance shows signs of instability), Unterveldt invites Helen to the podium to make a speech and present her perfume, and as everyone has their attention fixed on the presentation of the commercial for it, Sarah sneaks beneath the podium. As Helen is then preoccupied with Mintz (Stephen Tobolowsky) making a come-on, Sarah leaps out and injects the rest of the formula into her. Helen then slowly transforms back into Richard for good, much to the shock of the guests.

Richard explains to all that he was Helen the whole time, and he says that, in order to create the ultimate feminine fragrance, he had to get in touch with the part of himself that was a woman and had to dress, feel, and live like one, because deep down, there is a woman in all of us. Encouraged by Unterveldt, the people applaud him, and Sarah kisses him. Mintz (Stephen Tobolowsky) – with Unterveldt’s approval and partially due to embarrassment over having tried to get intimate with his Helen side – tells Richard that he is going to be made a partner in the company and will be given his own laboratory to do his work. Richard accepts, but tells them that he won’t be able to start for three weeks because he will be on his honeymoon with Sarah, and he and Sarah kiss again.

The final texts state the following: 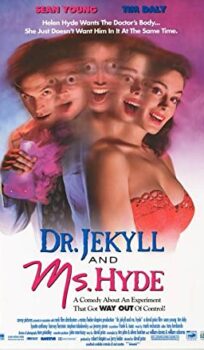