After getting the curse from Mrs. Ganush (Lorna Raver), Christine (Allison Lohman) tries different ways to get rid of the curse, from sacrificing her pet cat, to a seance. Finally, she is told that the only way to beat the curse is to give the item Mrs Ganush cursed (a jacket button) to someone else. She ends up giving the item (in a sealed envelope) to the corpse of Ganush, who died a couple days after Christine got the curse.

Relieved that she beat the curse, goes to the train station to meet her boyfriend Clay (Justin Long). He then reveals to her that she grabbed the wrong envelope, and he had the envelope sealed button on him. Shocked, Christine falls on the train tracks, while a train is coming towards her. Before she could get hit, demonic hands pop out of the ground and drag her to hell, incinerating her skin on the way down, all the while Clay watches in horror. 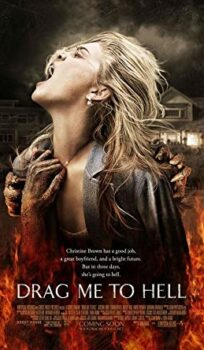