After running away from the destruction in Los Angeles Ethan and Sarah are tracked down by the flying dragons and their car is blown off the road.

Awaking in a strange temple area, surrounded by thousands of bad guys, Ethan’s protective medallion finally activates and destroys every living thing around him. That is except for the Imoogi and the evil general. The general attackes Ethan when he tries to untie Sarah from the alter, but he disinegrates when his sword touches the medallion.

The Imoogi is about to eat Sarah when the good dragon suddenly attacks. During a major, confusing battle the good dragon takes the Yoo Yi Joo from Sarah, killing her. It then destroys the Imoogi and goes back to Ethan, who holds Sarah’s lifeless body.

She appears to him in a glowing mist to tell him not to worry, but that she will always love him. She disappears, the good dragon flies into Heaven and Ethan is left standing in the middle of nowhere with no idea where he is. 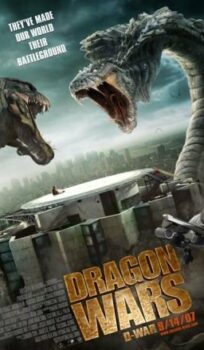