Goku, (Justin Chatwin) learns from King Piccolo that he is in fact the demon ape Oozaru. When the eclipse starts he transforms into Oozaru and rampages after Bulma (Emmy Rossum) and Yamcha (Joon Park) under Piccolo’s orders to take back the Four-Star Dragonball which Yamcha found a few seconds before the transformation.

Meanwhile, Muten Roshi (Chow Yun Fat) unleashes the Mafuba container in a vain attempt to trap Piccolo at the cost of his life, but Piccolo outsmarts him and destroys the container exhausting Roshi nearly to death. Yamcha gives Bulma the Dragonball to protect while he tries finding off Oozaru/Goku who knocks him down while he chases Bulma. As she is running he sees a dying Roshi and tries to help him but he too tries fending off Oozaru/Goku. In his rage Oozaru/Goku strangles Roshi while Roshi tries talking sense to him. Roshi dies and Oozaru/Goku through sheer will power turns back into his old self and fights it out with Piccolo.

Bulma and Mai have a shootout over the Dragonball. Mai seems to gain the upperhand until Yamcha arrives and shoots her. Goku embraces both his human side and Oozaru side when he unleashes a Kamehameha wave at Piccolo flying through him at the same time defeating him. Goku then reunites with Bulma and Yamcha and uses Dragonballs to wish Roshi back to life.

The Dragonballs scatter and Bulma plans to look for them with Goku and Yamcha’s help. Goku agrees to the task but decides he has to do one thing first. He then visits Chi-Chi and apologizes for hurting her when she and her doppelganger (Mai) were fighting early on in the film. Chi-Chi insists that she let Goku hit her; while Goku arguse that he wasn’t holding back and was too fast. They decide to settle it by having a match running at each other at full force before the credits roll.

In a post credit scene we see Piccolo being nursed back to health plotting his revenge. 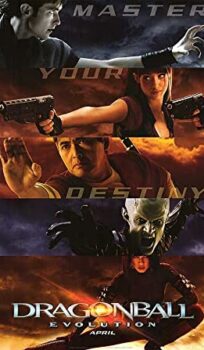