Pooper :
Judge Dredd and Anderson bring down Ma-ma’s drug cartel, killing her and almost all her henchmen. Judge Dredd says that Anderson passed the field test and is worthy of becoming a judge.

Long Ending:
The film takes place in a post-apocalyptic future. Much of the world has been destroyed and nuclear radiation has led to the birth of mutants with special abilities or deformities. Most people live in Megacities, residing in gigantic skyscrapers called “Blocks.” Law and order is enforced by a group of Judges who act as the police, judge, jury and executioner. One of the most skilled and feared Judges is the stoic Judge Dredd (Karl Urban). He enforces the law strictly, although he is always willing to give people one chance to agree to change their ways before issuing a sentence of death.

At the Judge’s headquarters, the Chief Judge asks Dredd to evaluate a cadet named Anderson (Olivia Thirlby) for entrance into the Judges. Anderson just failed her academy tests, but the Chief Judge is interested in giving her a field test because she is a mutant with powerful psychic abilities. Judge Dredd begrudgingly agrees to the field test. Anderson gets to choose the assignment and the pair go to investigate the murder of several people who were thrown from the top of a 200-story block called “Peach Trees.”

Peach Trees houses many innocent families and legitimate businesses. Unbeknownst to Judge Dredd and Anderson, the Block is controlled by ruthless drug-kingpin Ma-ma (Lena Headey). Dredd and Anderson initially conclude that the deaths were the result of a small-time drug deal gone bad. They search the Block and after a quick gunfight at a low-level dealer’s apartment, they apprehend a man named Kay (Wood Harris) and Anderson convinces Dredd to bring him in for interrogation. It is apparent that while Anderson is proficient in the knowledge of the law, she is hesitant to use lethal force or consistently enforce the law as her psychic abilities allow her to see the motivations and life history of people beyond just their criminal actions. Judge Dredd has no such qualms about making quick decisions and enforcing the maximum penalty to those who don’t repent.

Ma-ma has been watching this sequence of events on her monitoring system. Kay is actually one of her top lieutenants and she realizes that if he is interrogated, he will eventually expose her entire operation. She then threatens the Block’s technical IT operator (Domhnall Gleeson) into shutting the building down in emergency mode (making it impossible to leave) and cutting off the Judge’s communications to their headquarters. Ma-ma then makes an announcement that she will pay a handsome reward to any tenant who kills the judges.

Most tenants simply hide and cower from the Judges, and the ones who attack are easily killed or crippled by Dredd and Anderson. Seeing that the tenants are ineffective, Ma-ma has the IT guy determine the floor they are on and orders her trained henchmen to destroy the entire floor. Though Dredd and Anderson manage to escape the assault, almost every civilian on that floor is killed. Anderson psychically interrogates Kay and they discover that Ma-ma is the sole producer and distributor of the drug Slo-Mo in the city. Although Dredd eventually manages to radio for backup, he and Anderson decide to continue to make their way up to the top floor to capture and sentence Ma-ma.

Ma-ma calls in four corrupt judges to hunt down Dredd and Anderson. In the meantime, Kay manages to free himself from his bonds and capture and disarm Anderson. She eventually turns the tables, killing Kay herself and finally deciding to embrace the use of lethal force for certain criminals. She also uses her psychic powers to expose and kill the one corrupt judge who was sent after her once she killed Kay. Judge Dredd takes out two of the other judges but is wounded by the third. As the remaining corrupt Judge gloats over a defenseless Dredd, Anderson kills him from behind. Judge Dredd heals his wounds and the two finally reach the top floors where Ma-ma has barricaded herself.

Anderson and Dredd corner the IT man and she psychically rips the access code for Ma-ma’s lair from his mind. Judge Dredd intends to execute him as accessory to Ma-ma’s crimes, but Anderson is able to sense that he was tortured into assisting Ma-ma and commutes his sentence, letting him go. Anderson notes that she has failed her field test (being disarmed and captured is an automatic failure), but says that during her remaining time in training, she will dispense justice fairly using her powers. Dredd seems impressed with her resolve and the two enter Ma-ma’s lair.

After a gunfight in which Anderson is injured, the Dredd takes out all of Ma-ma’s henchmen. Ma-ma then faces Judge Dredd alone, saying that she has attached a trigger to her heart. If her heart stops, the trigger will send a radio signal to detonate explosives causing Peach Tree to explode and killing hundreds of innocents as well as Judge Dredd and Anderson. Dredd refuses to negotiate and instead, wounds Ma-ma with a gunshot. He then guesses that the trigger’s signal isn’t powerful enough to extend 200 stories to where the receiver on the top floor and throws her off the building. She dies when she hits the ground, and Judge Dredd’s guess is proven correct when the explosives fail to detonate.

The Judges turn off the Block’s lock down mode just as actual backup arrives, led by the Chief Judge. Dredd had already healed Anderson’s wounds and she returns her badge and stalks off into the night, knowing she has failed her field exam. Judge Dredd, however, tells the Chief Judge that Anderson passed the exam (having clearly been impressed with not just her skill, but also the greater depth of judgment her psychic abilities allow her to dispense) and goes after Anderson to return her badge to her. 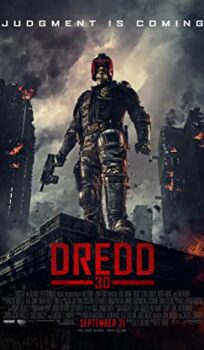