SHORT VERSION:
Nicole and Chase end up together by the time of their school’s Centennial Dance. Later on, they are surprised to find out that Nicole’s mother and Chase’s father have been secretly dating, and they learn from them that they are going to be moving in together. Nicole and Chase soon show signs that, even if they do become stepsiblings one day, they won’t let that stop their new relationship.

LONG VERSION:
While Nicole (Melissa Joan Hart) and Chase (Adrian Grenier) are at a party at Brad’s (Gabriel Carpenter) house, Alicia (Susan May Pratt) notices Brad trying to get friendly with Nicole, which is what Nicole had been hoping for, and she sees that an intoxicated Chase is noticing this as well. Since she wants to be Brad’s date to their school’s upcoming Centennial Dance and has been scheming to keep other potential dates – chiefly Nicole – away from him, plus knowing that a mutual attraction has been developing between Nicole and Chase, Alicia decides to seduce Chase where Nicole can see her in the hope that she will get so upset that she won’t talk to Brad any further. Her plan works; Nicole gets upset to the point where she locks herself in a bathroom, and though Chase tries to explain things to Nicole through the door, she won’t listen to him. He soon calls for his friend Dave (Mark Webber) to come to pick him up and take him home since he is too drunk to drive, and Nicole confronts and rebukes Alicia for what she did, but Alicia is unrepentant. 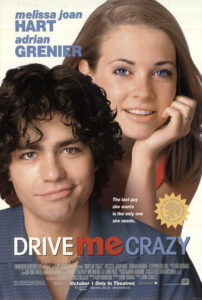 As Dave is driving Chase home, he suddenly stops the car and scolds Chase for not inviting him or Ray (Kris Park) to the party because they are supposed to be his friends. Chase replies that he is just jealous, for he has spent a long time trying to become a part of the in-crowd and all he ended up becoming was something of a servant to them, and he tells Dave that that is all he will ever be to them and he should just tell them to go screw themselves. Dave then gets paged to pick up someone else from the party, and Chase tries to talk him out of it, saying that there are sober people there who just don’t want to leave. Dave decides to go get the partier(s), and Chase gets out and walks home in frustration. Dave ends up driving Dee (Keri Lynn Pratt) and her boyfriend Eddie (Jordan Bridges) back home, and when Eddie tries to get frisky with Dee in the back seat along the way, Dee rejects his attempts. This prompts him to start showering her with insults, which in turn motivates Dave to stop the car and pull him out and order him to walk home. Eddie gives him a brief beating for this, but when he turns his attention back to Dee, she sprays mace in his eyes. At Dee’s request, Dave drives her back to the party, leaving Eddie to writhe in pain on the road.

At school the following Monday, Dulcie (Ali Larter) comes up to Chase and says that she wants to reconcile with him, but it is clear that Nicole is still on his mind. He soon tries to talk to Nicole about what happened with Alicia, but she informs him that he has exercised the easy-out clause they established at the beginning of their partnership, so there is no more for them to discuss. That night, he tries to call her at home, but she doesn’t answer. At school the next day, Brad comes up to Nicole and asks her to be his date to the Centennial Dance, and Chase resumes his makeout sessions with Dulcie, but he is not into them as much as before. Later, we find out through a conversation Nicole has with Dee that Nicole actually turned Brad down, claiming that, when she got what she wanted, it didn’t matter anymore. That night, Chase hangs out with Dave and finds out from him that his online girlfriend, DAUGHTERJUDY, is going to the dance with him, and she will be e-mailing her address to him just before the event. However, when Dave asks Chase if he will be attending, he says no. Come the night of the dance, Nicole telephones Ray and asks him to be her date, remembering how he said he would go with her if she had no other alternatives, and he agrees to accompany her. Dave goes to meet DAUGHTERJUDY at her home as planned, and off-screen, he discovers that it is Dee (her name is short for Judy), and they are both very pleased about this.

At the dance, Alicia – who has become Brad’s date as she wanted – comes up to Nicole and tries to apologize for how things went down between them, saying that she really thought that Brad was going to ask her to the dance. Nicole takes this opportunity to get even with her by telling her that he did ask her out, but she told him she already had a date, and seeing that he was bummed out by this, she told him to take Alicia because she was promiscuous. Nicole’s oft-absent father (Stephen Collins) soon shows up, since alumni were invited to the event, and he tells Nicole that he decided to forego attending the hot air balloon festival in Rio de Janeiro that he had planned on going to because he has accepted that he needs to start being a better father to her, and they agree to have dinner the following night. Meanwhile, Chase goes with Dulcie to the coffee house they once frequented, but he soon gives her the kind of stare that says that their relationship has run its course, and he then leaves.

Later, when the senior class’ centennial sculpture is unveiled, everyone sees Chase perched up on top of it. His eyes meet Nicole’s, and after sliding down the sculpture to the floor, he makes his way towards her. Accepting that Nicole really should be with Chase, Ray graciously steps aside, and she and Chase have a wonderful slow dance (as do Dave and Dee). When they return to Nicole’s house afterward, they share a big kiss goodnight, but it is interrupted when Nicole’s mother (Faye Grant) and Chase’s father (William Converse-Roberts) emerge from the house, having obviously just had a romantic rendezvous. They pretty much confirm to their respective progeny that they have been secretly dating for a while, and they have just now decided to move in together. Nicole tells them that she and Chase will go into the treehouse in Chase’s backyard to think about this decision while they can think about things from where they are.

As Nicole and Chase go, they show signs that, even if they end up becoming stepsiblings one day, they won’t let that stop their new relationship.