Freedonia goes to war with Sylvania. The war goes badly for Freedonia, which is on the verge of being conquered by Trentino and the Sylvanians.

Chicolini (Chico Marx) and Pinky (Harpo Marx), who had earlier been traitors, return to fight for Freedonia, since the food is better in the Freedonian army. As Trentino and the Sylvanians burst into the Freedonian Presidential Palace, Trentino becomes stuck in a wall, where Rufus T. Firefly (GFroucho Marx), Chicolini and Pinky pelt him with fruit. The humiliated Trentino declares that his army surrenders, but the boys vow to keep pelting him until they run out of fruit.

An overjoyed Mrs. Teasdale (Margaret Dumont) begins to sing the Freedonian national anthem. She sounds so awful that the boys pelt HER with fruit, instead. 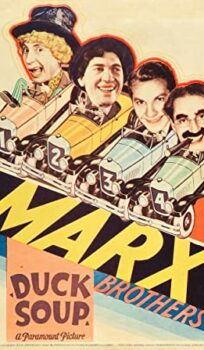