After many misadventures, Peter Highman (Robert Downey Jr.) and Ethan Tremblay (Zach Galifianakis) become friends. They stop off at the Grand Canyon to spread the ashes of Ethan’s father there. Ethan explains he actually had Peter’s wallet but didn’t want to go to LA alone being in a shock over his dad’s death. Though Peter is mad (and winds up being accidentally shot by Ethan later), they make it to the hosptial on time where his wife Sarah (Michelle Monaghan) gives birth to their child, a girl, not the boy they were told they were having. They name her Rosie.

About a year later, Sarah and Peter and baby Rosie are watching Two and a Half Men where Ethan is guest starring as a pot dealing math tutor, his dream of becoming an actor underway. 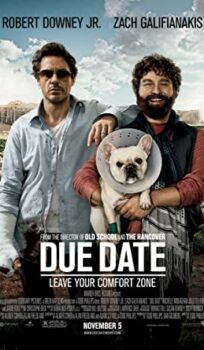