Lloyd (Jim Carrey) and Harry (Jeff Daniels) are two very stupid roommates who go on a cross-country journey from Rhode Island to Aspen (Colorado, not France) to find Mary (Lauren Holly), the girl on whom Lloyd has a crush.

They get lost along the way and also commit manslaughter. Lloyd reveals that the most annoying sound in the world is “NNNNEHHHHHHHHHH.” Harry later becomes a rival suitor for Mary, though in the end it is revealed that she already has a husband–a heartbreak that not even a busload of well-endowed Tropicana models can remove. 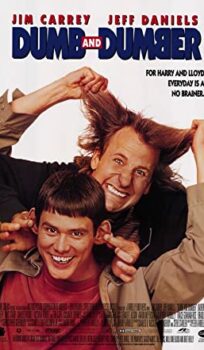