When circus-going children make fun of Dumbo for his big ears, Dumbo’s mother takes charge and pushes them away. This causes her to be chained and caged away from her son.

Timothy the mouse remains at Dumbo’s side to support him and tells him that he will be a star, and later speaks in the conductor’s ear while he is asleep, encouraging him to make Dumbo the center stage act. But the act flops, and the elephants agree that Dumbo should be left with the clowns.

Out of the circus, Dumbo and Timothy are drinking from a barrel, when we realize it is alcohol. The two have a drunken hazy trip complete with pink elephants.

The next morning, Dumbo and Timothy awake in a tree, and a nearby group of crows laughs that they must have flown up there. Though Dumbo is hesitant, he is given a black feather from one of the crow’s tail, and believes that he can fly as long as he hold the “magic feather.”

The next performance, Dumbo is set up as a clown in a fire stunt. While jumping from the tall structure, the feather flies out of his grip, and Timothy screams that the feather was never magic, and Dumbo can really fly. With nothing to lose, Dumbo straightens his ears and manages to glide around the circus tent, paying back the elephants and children for their poor treatment of him.

The flying elephant is a successful story that boosts the circus’s popularity so much that they get a new train and Dumbo gets his own caboose, complete with his freed mother. 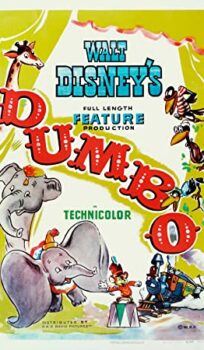