POOPER:
The evacuation of Dunkirk is a success. Farrier the Spitfire pilot (Tom Hardy) lands his plane on Dunkirk. He is promptly arrested by the Germans.

LONGER:
British and French soldiers are trapped on the beaches of Dunkirk during World War II as they try to wait out for a rescue while also trying to avoid getting killed by German soldiers.

We follow three groups – soldiers on land, a mariner and two young men on the sea, and two pilots in the air – as they come together to meet at Dunkirk.

Private boats, including the one sailed by the mariner (Mr. Dawson), arrive to rescue the soldiers. The pilots shoot down German bombers from attacking. One pilot (Farrier) is captured by German soldiers after landing his plane.

The British soldiers are welcomed back as heroes, and the commanding officers stay behind to help the French. 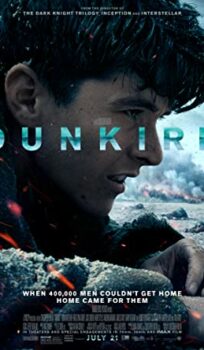