Pooper:
Liza and John are shepherded through the gateway to Hell. The pair go blind and are cursed to wander through the hellscape.

Long Ending:
In 1927, an artist named Schweik paints a portrait of a Hellish landscape inside a Louisiana hotel. Nearby, a woman named Emily (Cinzia Monreale) reads from a supernatural tome called the Book of Eibon. A group of locals break into Schweik’s hotel room and accuse him of witchcraft. Though Schweik claims he is trying to protect the town, they torture and murder him. Concurrently, Emily reads that the hotel is located on top of a gateway to Hell (i.e, the beyond) and that those who journey there (even ignorantly) will be cursed. The book then spits forth fire and Emily screams…

Jumping ahead to 1981, a woman named Liza Merril (Catriona MacColl) inherits the hotel, which is now run down. She is working with a woman named Martha and Martha’s son Arthur to rehabilitate the hotel and reopen it. Liza also befriends local doctor John McCabe (David Warbeck). However, she experiences much misfortune. Workers get injured, ghostly presences haunt the hotel, and the basement is flooded. When a plumber named Joe investigates the basement, he accidentally breaches the wall enclosing the gateway to Hell and is killed by a ghoul lying within. Martha later finds Joe’s corpse floating in the basement alongside the corpse of Schweik. The bodies are taken to John’s morgue.

Emily, who is now struck blind (and has not aged), mysteriously appears to Liza and unsuccessfully urges her to abandon the hotel. More people working on the hotel project die via supernatural means and Liza herself begins going crazy as she sees the ghost of Schweik and finds the Book of Eibon. John tells Liza that nobody named Emily lives in their town and that the house Liza claims Emily lives in is abandoned. Meanwhile, Joe’s daughter Jill is orphaned when her mom dies under mysterious circumstances while visiting Joe’s body in the morgue. Emily appears to Jill at the funeral for her parents and Jill is struck blind.

One night, the corpses of Schweik and the other dead bodies in the morgue reanimate and visit Emily. She pleads with them to leave her alone (saying she doesn’t want to “go back,” ostensibly to Hell). But she is killed by her seeing eye dog. Meanwhile, John reads from the Book of Eibon. Seeing that the book predicts an apocalyptic event and is full of Hellish stories, he accuses Liza of being driven mad by the book and orchestrating all the deaths. However, as the pair argue, the gateway to Hell under the hotel fully opens. The two flee the hotel and go to the hospital where John hopes to get help.

When they arrive, almost everyone has vanished or been turned into zombies. John and Liza are chased to the morgue, where they are attacked by Schweik’s corpse and a possessed Jill. The pair manage to kill many of the zombies, but are mysteriously transported back to the basement of Hell as they flee the zombies. With their exit blocked, they cross through the gateway into Hell. They find Hell looks exactly like the painting drawn by Schweik. The pair try to flee, but find that the gateway has vanished. Liza and John are then struck blind, as a narrated passage from the Book of Eibon states that they will be doomed to explore the hellscape for the rest of their days. 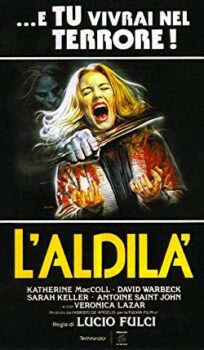