The saucers carry the last survivors of an alien species who are fleeing their destroyed solar system and looking for a new home – and they want Earth! Contacting Dr. Russel Marvin (Hugh Marlowe), they ask for a meeting with Earth’s leaders in 56 days to negotiate the surrender and occupation of Earth.

Dr. Marvin uses the time to create a new sonic weapon which can neutralise the alien’s technology. He is able to successfully test it, and the military quickly put it into mass production.

The saucers launch a major attack on the world’s capital cities. The military are able to use the new weapons to bring the saucers down, defeating the invasion.

With the saucers defeated, Dr. Marvin and his wife Carol (Joan Taylor) celebrate with a trip to their favourite beach. 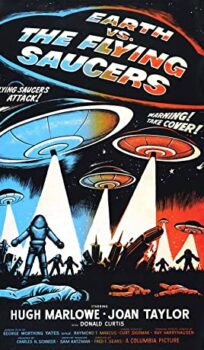