The film takes place in London when a teen gives birth to a young baby at a hospital and dies soon afterward. The midwife Anna (Naomi Watts) decides to try and discover who the father of the child is to return them.

Anna’s involvement gets her entangled with the Russian mafia headed by the “godfather” Semyon (Armin Mueller-Stahl), his deranged son Kiril (Vincent Cassel) and their brutal enforcer/friend Nikolai (Viggo Mortensen).

Nikolai, unbeknownst to Semyon or Kiril, takes a liking to Anna and secretly aids her throughout the film.

It turns out the baby’s father is Semyon and, if it is discovered, he will be arrested for statutory rape.

Nikolai meanwhile, kills the enforcers of a rival gang who had wanted to assassinate Kirill for a crime he had perpetrated against them. After the show of loyalty to Kirill and other demonstrations of his loyalty, Nikolai is placed as the next  in line to take over the Russian mafia.

Though Semyon and Kirill try to kill Anna, they are unsuccessful and Semyon’s secret is exposed and he is arrested.

In the end, Anna keeps custody of the child, and Nikolai is elevated to the head of the mafia instead of Kirill, making Kirill incredibly jealous. Unbeknownst to almost everybody, Nikolai turns out to be either an undercover agent (or at least, an informant) for the authorities, leaving the authorities in charge of the mafia. 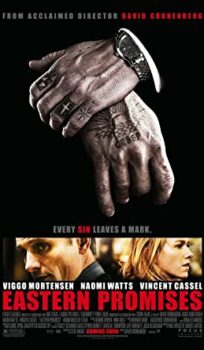