While headed to Mardi Gras they are arrested for parading without a permit.

Jack Nicholson gets them out of jail, puts on a football helmet and joins them. Nicholson is then killed by rednecks while they are camping.

Fonda and Hopper make it to New Orleans and party with Karen Black and Toni Basil by dropping acid in a cemetery. Fonda tells Hopper that they blew it, but Hopper doesn’t understand that Fonda means that they may have found money, but not happiness.

They are then killed on the road by rednecks with a shotgun. 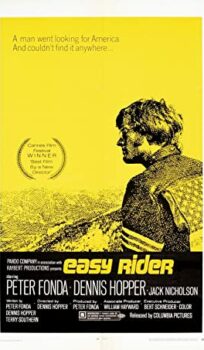