Adventurous race car driver Larita (Jessica Biel) returns to her new husband John’s frosty upper-crust English home to meet his less than thrilled family.  As John’s mother (Kristin Scott Thomas) continues to attempt to create a wedge between them, it becomes increasingly clear that John is naive and easily led.

Larita bonds with John’s reclusive father Jim (Colin Firth) who returned home after the war disillusioned, isolating himself from the frivolities of society and his wife.  When Larita’s past comes to light and she unapologetically tells John’s family that she helped her ailing first husband commit suicide rather than let him suffer, John is shocked and withdraws while Jim stands up for her.

Larita realizes that John is too young and has no real understanding of love.  She leaves and is pleasantly surprised when Jim leaves with her. Before going, she apologizes to the young woman John was in love with before he met Larita, telling her she should have never come between them and wishes them well. 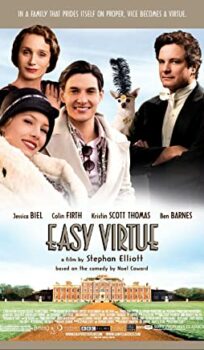