An upbeat look at Ed Wood.

POOPER: Thanks Don P.
Ed Wood (Johnny Depp) is the worst director in Hollywood.  He is surrounded by weirdos, transvestites and a drug addicted Bela Lugosi (Martin Landau in the role that won him an Oscar).  After Lugosi dies, Wood convinces the Baptist Church of Beverly Hills to finance “Plan 9 From Outer Space”.  Wood uses existing footage of Bela Lugosi before he died and a bald chiropractor to be Lugosi’s double.  The film looks like it won’t be finished and Wood gets stressed, so he goes to a bar where he meets ORSON WELLES.  Wood and Welles bond and an encouraged Wood finishes Plan 9 From Outer Space.

Long Ending:
Based on the true story of infamous director Ed Wood (considered one of the worst directors of all time).

Aspiring filmmaker Edward D. Wood (Johnny Depp) has opened a sparsely attended play to poor reviews. His acting buddies, including a transgender actor named Bunny (Bill Murray), admire Ed’s work and passion despite the reviews. Ed’s girlfriend Dolores Fuller (Sarah Jessica Parker) is also supportive – acting in his plays, proofreading his scripts, and posing as a secretary for Wood’s fake production company. When Wood learns that a producer intends to make a salacious film about a transgender person undergoing sex reassignment surgery, Wood applies for the job. In so doing, he admits to the producer (and later, Dolores) that he enjoys cross-dressing (even wearing female undergarments while serving as a soldier in WWII). Ed doesn’t get the gig.

A few days later, however, Ed meets actor Bela Lugosi (Martin Landau). Lugosi was once a major Hollywood star, best known for his portrayal of Dracula. Now, however, he is poor and considered washed up. Lugosi is also addicted to morphine. The pair becomes friends and Ed is able to get the directing gig for the transgender film when Lugosi agree to be in it. The film, Glen or Glenda, is a big flop and heavily derided.

Dolores convinces Ed to independently finance his next film. He meets several other low-level celebrities such as a TV “psychic” named Criswell (Jeffrey Jones) and a pro wrestler named Tor Johnson (George “The Animal” Steele), who all agree to star in his film alongside Lugosi. Wood makes many promises to potential investors, even agreeing to replace Dolores in the lead role. By shooting multiple scenes a day in one take, as well as using stock footage and stealing props from a major studio’s backlot, he completes his second film on a shoestring budget. This film, Bride of the  Monster, is also terrible. Dolores later breaks up with Ed, angry over his recasting of her and disapproving of his lifestyle.

Lugosi’s drug use gets worse. Ed eventually convinces Lugosi to check into rehab after he attempts suicide. While in the waiting room at the rehab center, Ed meets a woman named Kathy O’Hara (Patricia Arquette) and they begin dating. She also accepts his cross-dressing. After Lugosi is kicked out of rehab due to his inability to pay, Ed shoots random scenes with him in an effort to keep Lugosi’s spirits up. Unfortunately, Lugosi dies unexpectedly and is buried in his Dracula costume.

Ed learns that his landlord’s church is looking to make 12 films about Jesus’ apostles but only has the money to make one film. Ed convinces the church to finance a sci-fi film he wants to make, incorporating the footage he shot of Lugosi before his death. Ed gets them to agree by saying his film will generate enough revenue that they can finance all 12 movies about the apostles. Unwisely, the church agrees to this. Ed assembles his loyal cast – Tor, Bunny, and Criswell – and also adds a semi-famous actress named Vampira (Lisa Marie) after she is fired from her TV gig as a horror movie host. They also hire Kathy’s chiropractor to serve as a stand-in for Lugosi in new scenes (hiding his face behind a cape in the scenes he will shoot).

Ed begins shooting the film, a story about aliens that raise the dead. The producers grow increasingly concerned with his inattention to details and cross-dressing. At a nearby bar, Ed meets his hero Orson Welles (Vincent D’Onofrio). Orson tells Ed that no amount of money or fame is worth a compromised vision. Ed retakes control of the production from the church, but agrees to change the title to their suggested “Plan 9 from Outer Space.” Despite the poor quality of the film, Ed optimistically calls it his masterpiece and the film he will be remembered for.  Ed proposes to Kathy and they gleefully drive off into the night.

The film ends by informing us that while Ed Wood continued making films, though none were successful (and Plan 9 from Outer Space is deemed one of the worst films ever made – but is also a cult classic for which Wood is remembered). Kathy remained married to him the rest of his life. Lugosi’s career was posthumously reappraised, and he is both respected as an actor and sells more memorabilia than his professional rival Boris Karloff. Bunny never obtained the gender reassignment surgery he wanted. Tor enjoyed success when his face was used as the basis for a famous halloween mask. Criswell also gained fame as a regular guest on the Tonight Show. And Vampira left the film industry and sued Elvira for infringement of her image. 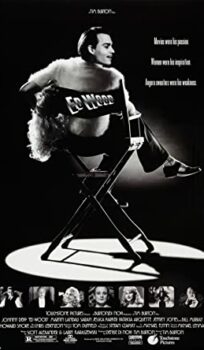