Because of Ed’s skills as a third baseman and Jack (Matt LeBlanc) improving his performance because of his new relationship with Lydia (Jayne Brook), the Rockets find themselves in the championship game against the Devils.

However, the day before the game, Kirby (Patrick Kerr) – the son of the team’s owner Abe Woods (Mitch Ryan) – sells Ed to the Palominos. Spurred on by Lydia and Liz (Doren Fein), Jack heads to the Palominos’ home field the next day to steal Ed back. He gets past security and soon finds Ed, who is dressed up like a mascot and being abused by his new “handlers”. After beating up the handlers (with some help from Ed), Jack gets Ed out, but Ed – thinking with his stomach – enters a Nutty Nanner ice cream truck that is leaving the field. Jack follows the truck and eventually gets the driver to pull over, and he finds Ed shivering badly inside.

He gets Ed to the hospital, and Lydia and Liz eventually show up. Jack tells them that he knows he has to play today, but he doesn’t want to leave the sedated Ed because he knows that he’ll be scared if he wakes up and sees nobody around. Liz tells him that she’ll stay with Ed, and Lydia gets Jack to the game. Jack tells the team about Ed’s condition, so they dedicate the game to him and collectively vow to kill Kirby afterwards. A short time later, Abe finds out about what Kirby did and he reprimands him for it.

During the game, Ed awakens, and after he sees Jack playing on TV, he hurries with Liz to the ball field. In the top of the ninth inning, the Rockets are up by one and the Devils have two outs, but the Devils have the bases loaded, and Jack is pitching against Kurt Bunyon (Rick Johnson), a player that frequently bests him. Before he can throw the first pitch, Ed and Liz arrive. Feeling good now that Ed is there, and after getting a kiss from Lydia for good luck, he strikes out Bunyon and wins the pennant for the Rockets.

Tommy Lasorda (himself), who was brought in by Abe to scout the talent, tells Abe that he wants Jack in Los Angeles next week and to pay him whatever he wants. The movie closes with Jack moving to Los Angeles with Ed, Lydia, and Liz. 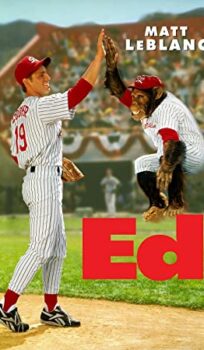