During her time as head coach of the New York Knicks, Eddie (Whoopi Goldberg) manages to mold the team into a cohesive unit, and she also assists with solving some of the players’ personal problems and even manages to set straight the ball-hogging Stacy Patton (Malik Sealy). Eventually, the Knicks find themselves one victory away from the playoffs.

While Eddie is hanging out with the team’s owner, Wild Bill (Frank Langella), one night, he gives her the keys to a penthouse apartment and tells her that she will be making $1,000,000 plus expenses over the next three years. However, all of that is because – should the Knicks get the playoff berth – he plans to sell the team to some businessmen from St. Louis, after which they will be moving the Knicks there. Eddie disapproves of this, saying that the city of New York owns the Knicks, and he doesn’t understand that because he doesn’t have any roots here. Wild Bill then admits that he brought her on as a sideshow act meant to entertain, and then he discredits her coaching abilities before telling her that he will fire her if she doesn’t do what he wants her to do. Eddie tells him to get stuffed and leaves.

The next night, the Knicks have their playoff qualifying game against the Charlotte Hornets, and we see that John Bailey (Dennis Farina) – the Knicks’ former head coach who has a mutual dislike with Eddie – is now coaching the Hornets. Eddie is initially a no-show due to how conflicted she feels about the whole situation, but she ends up making her arrival just before the game gets underway. During the second half, Nate (John Salley) gets benched after his bad knees take a hit, so Eddie decides to finally let Patton back onto the court, and he behaves like a team player this time around and earns his teammates’ respect. After the Hornets call for a time-out with ten seconds left in the game and the Knicks ahead by one point, Eddie looks up at Wild Bill’s private box and sees him getting ready to go out and address the crowd once the game ends. After then seeing and listening to the cheering fans, Eddie takes a microphone and goes out to center court, where she informs everyone that Wild Bill is planning to sell the Knicks and have them moved to St. Louis if they win tonight. The crowd looks in Wild Bill’s direction and boos him heavily, and after he exits his box and makes his way down to the court, Eddie tells him that he bought the team, but not the fans, and then says that he will have to force her out of the arena himself because she isn’t moving. The team, the arena staff, and a large number of spectators then come onto the court and stand with Eddie as a means of telling Wild Bill that the Knicks are staying in New York. Now faced with the possibility of receiving a massive amount of backlash from the fans, Wild Bill announces that a sale was never being considered, and as everyone returns to their places, he concedes defeat to Eddie.

Before the game resumes, Bailey tells the Hornets that they need to go after the Knicks’ center Ivan (Dwayne Schintzius), so they must pass the ball to their star forward Larry Johnson (himself) and then have him drive the lane on the way to getting the winning basket so Ivan will commit a blocking foul, like he is habitually prone to do. Though Johnson is able to score the two points, it turns out that Ivan kept his feet planted this time, resulting in Johnson getting called for charging and nullifying the basket, awarding the Knicks the victory and the playoffs spot. As Eddie celebrates with her team, Patton’s mother goes onto the court and repeatedly whacks Wild Bill with her purse for almost moving her son to St. Louis. 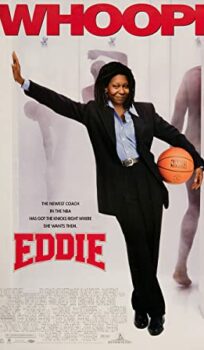