Pooper:
Cage is able to go back in time after dying due to being covered in the blood of a very rare Mimic called an Alpha. The Alphas act as the “central nervous system” of the Mimics, with the “brain” being the Omega, which is the source of the rewind and thus what makes them invincible. At the cost of the lives of his squadron, Vrataski and himself, he destroys the Omega and gets covered in its blood, which makes him go back once more to before the attack begins, only this time the Omega is already dead and the aliens defeated. The movie ends with Cage meeting Vrataski again.

Long version:
Earth is under attack by aliens known as “Mimics”, who have managed to already conquer most of Europe. After several defeats, mankind finally manages to eke out a win at Verdun, which is attributed to special mechanical exoskeletons called “Jackets” and the actions of Special Forces solider Rita Vrataski (Emily Blunt), who has become a symbol of hope, known as the “Angel of Verdun”. Major William Cage (Tom Cruise) gives several PR campaigns citing Vrataski’s lack of prior experience as proof of the Jackets’ effectiveness even with minimal training.

Cage is sent to London where he meets with General Brigham (Brendan Gleeson), who is currently planning a surprise attack on the Mimics on the Northern French coast. As he expects the attack to go well, he orders Cage to be on the front lines with a camera crew for propaganda purposes. Cage admits that he is actually a former advertising executive hired to do PR for the military and he has never seen combat in his life. The General insists in sending Cage, which prompts the latter the blackmail the former by threatening to smear him on the media. The General responds by having his staff arrest and taser Cage.

Cage wakes up in the invasion forward base in Heathrow Airport where he finds that he has been charged with desertion and busted down to Private. He is assigned to J Squadron under Sergeant Farrell (Bill Paxton). Everyone hates him and ignores his questions as to how his equipment and weapons work. When they arrive at the invasion site, what was supposed to be an easy attack turns into a complete massacre at the hands of the Mimic forces, as if they were anticipating them. Cage bumbles his way through the battlefield until he’s attacked by a large blue Mimic. Cage manages to suicide bomb the Mimic with an antipersonnel mine, and the latter’s blood covers the former as he dies.

Cage then wakes up back at Heathrow Airport and realizes that the day is repeating itself. He eventually goes through the attack again and dies once more, again waking up at Heathrow. He tries to warn everyone about how the Mimics know they are coming but he is not believed and cannot stop any of his squad and himself from dying over and over at the beach, each time waking up back in Heathrow the previous day. He eventually focuses his efforts on trying to save Vrataski, who after seeing him anticipate multiple otherwise lethal events, tells Cage that she knows what is happening and to find her “when he wakes up”, after which they are killed again.

Cage spends a few more time loops nailing down how to sneak away from Farrell and Squad J and finally tracks down Vrataski and explains what is happening to him. She takes him to Dr. Carter (Noah Taylor), a physicist who has been studying the Mimics. They explain that the blue Mimic that Cage killed was a rare “Alpha” mimic who acts as the “nervous system” of the Mimic race with the “brain” being the “Omega”, which is able to reset the day. With this power, the Mimics are able to anticipate their enemies’ movements and thus are invincible. Vrataski was also covered in an Alpha’s blood and thus gained the same power that Cage has, only she lost it when she received a blood transfusion after an injury. She also gained visions of the Omega’s location, only she lost the power before she could find it. Humanity’s only hope is for the Omega to be destroyed, shutting down the Mimics’ rewind power. For that, they will have to “wait” until Cage gets the visions, which should happen MANY loops later. “Until” then, Vrataski trains Cage in combat, through a long series of loops.

Cage eventually gets the visions of the Omega, which is apparently located in a hydroelectric dam in Germany. Cage spends dozens of loops figuring out how to get himself and Vrataski out of the beach safely. They eventually succeed and make their way to the French countryside. Cage notices Vrataski keeps herself distant and she reveals she has a similar “relationship” to a non-looping person who she saw die 300 times before finally dying “permanently”. They eventually find a small helicopter which they can use to find the Omega but Cage insists in not using it. At Vrataski’s prodding, Cage finally admits that they reached this point several times and there’s no way that Vrataski survives beyond this point, due to nearby Mimics reacting to the helicopter’s engine starting. Despite Cage’s insistence that they hunker down, Vrataski insists that Cage sees this through despite leading to her “permanent” death once the Omega ends and she starts the engine. They both die in the aftermath.

Cage then decides to distance himself from Vrataski and ignores her while he goes off to the dam alone, but finds nothing there except for some Mimics lying in ambush. He contacts Vrataski in the following loop and they realize the visions were decoys all along. Their only hope of finding the Omega is a special device that Carter developed that jacks into the connection between the Alphas and the Omega. Though it requires a live Alpha, they hope that Cage’s connection will suffice.

They use several loops to infiltrate Whitehall where the device is kept and convince General Brigham to cooperate. However, he sics the guards once they leave and they escape by car, during which Cage uses the device to locate the Omega in the Louvre in Paris. Unfortunately, they crash the car and Cage wakes up and finds that he received a blood transfusion, removing the time rewind power. Cage is rescued by Vrataski and they escape, knowing they must destroy the Omega without anymore second chances.

Vrataski and Cage recruit the rest of Squad J for their mission, using Cage’s detailed knowledge of them gained by several loops and Vrataski’s experience to convince them. They arrive in a Mimic infested Paris and all of Squad J dies in the process of getting to the Louvre. Knowing there is no way they can survive this, Cage and Vrataski share a kiss and the latter lures an Alpha away from Cage while he destroys the Omega with his grenades. Cage and the Omega die, but the latter’s blood covers the former’s corpse…

…and Cage awakens once again, but this time as he’s arriving in London, where General Brigham is announcing that due to an unexplained event in Paris, the Mimic forces have been rendered harmless. Squad J is naturally alive and well, knowing nothing about what happened and the movie ends with Cage approaching Vrataski, who will meet him for the “first”…and “last” time. 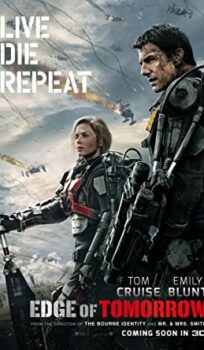