Two of the eight sled dogs die while being stranded in Antartica for seven months, when all the exploration teams are forced to evacuate because of bad weather. Buck, the oldest, freezes to death after he can’t get out of his collar and chain. One of the “twins” is also killed after he falls down a cliff and breaks his back, succumbing to the elements.

Maya, the pack leader, is bitten and severely wounded by a seal while the dogs scavenge a whale carcass, but makes it OK. The remaining six are all rescued by Gerry Shepherd (Paul Walker) and his exploration team when the weather finally breaks.

The two lost dogs are buried, and the film is then dedicated to Antartic explorers and their sled dogs, for their bravery and spirit. 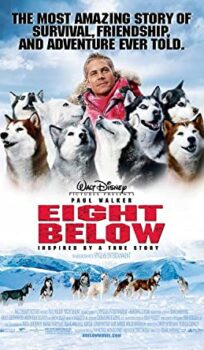