Robert Rodriguez’s first film, which he managed to do with as little as $7,000.00 dollars of budget. Imagine that!!

El Mariachi (Carlos Gallardo) arrives at Moco’s (Peter Marquardt’s) ranch and finds both Domino (Consuelo Gomez) and “Azul” (Reinol Martinez) -the criminal everyone had been mistaking El Mariachi with, all throughout the movie- dead. Moco killed them both.

When Moco confronts El Mariachi and he raises his hands as surrendering to avoid problems, Moco sadistically shoots him in the left hand, gruesomely disfiguring it, and then starts laughing maniacally at his deed. In answer, El Mariachi reacts and shoots Moco dead, while Moco’s henchmen pull back (OOOH, HOW LOYAL THEY WERE!!). Upon confirming Moco’s death, second-in-charge Bigotón (Jaime De Hoyos) lights a match on his dead body to light up a cigarette -as Moco used to do on him-, thus proclaiming himself as the new crime boss; he spares El Mariachi and everyone follows him.

The last scene shows El Mariachi at the side of the road, riding the motorcycle, bearing a gloved, half-mangled hand and in possession of the bulldog and the guitar case full of guns (he had lost his own guitar in all the confusion). In voice-over, he is lamenting about his misfortune and losing Domino. He then ignites the bike and drives off town. 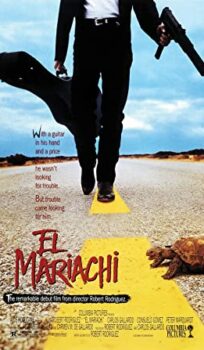