When Miles (Lenny Von Dohlen) attempts to download information from his work mainframe to his small personal computer at home, his PC begins to overheat. Miles pours champagne on it to try to destroy it before it causes damage to his works’ computer. This action, instead, gives creation to Edgar. His PC has now become sentient.

As the movie progresses, Miles and Edgar (voiced by Bud Cort) vie for the affections of the beautiful apartment neighbor, Madeline (Virginia Madsen). Eventually, Edgar realizes the futility of trying to woo a human and cedes victory to Miles, especially since Edgar realizes how much Miles and Madeline love each other.

Edgar decides to commit suicide by sending a power surge from his modem to all computers around the world, collecting more energy and picking up speed as the surge circles the globe. Edgar guides the surge back to himself, causing the complete destruction of Miles’ computer, and the death of Edgar.

Later, as Miles and Madeline drive in their car, they hear a song dedication on the radio to them from Edgar, and all the radios around the world play “Together In Electric Dreams” by Philip Oakey. 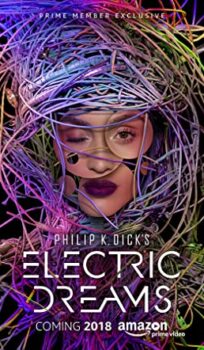