Drew Baylor (Orlando Bloom) has recently designed the sport shoe of the future, utilizing ground-breaking details and materials, based on dolphin fins. It is about to be reported as history’s greatest flop, losing close to one billion dollars for his former company, owned by Phil DeVoss (Alec Baldwin), who recites a quote by the CEO of their parent corporation, “This once highly anticipated product may actually cause an entire generation to return to bare feet”. Along with his job he loses his girlfriend, Ellen Kishmore (Jessica Biel), who gives him the bum’s rush for being a colossal failure.

As he is contemplating suicide and even preparing to carry it out, Drew is asked by his mother Hollie (Susan Sarandon) and sister Heather (Judy Greer) to return to their former hometown of Elizabethtown, Kentucky near Louisville (pronounced Loo-Wa-Vull) and retrieve the body of his recently deceased father.

On his way there, Drew meets a “clingy” flight attendant named Claire Colburn (Kirsten Dunst), who forces a relationship on him that ultimately turns his life around. After dealing with all the eccentricities of his relatives, while trying to fulfill his dad’s last wish (cremation) and bring the family together to say goodbye, he embarks on a cross-country drive, at the behest of Claire, with his father’s ashes, to find “himself”.

Along the way he finds her and discovers that being the creator of the worst sneaker of all time isn’t so bad, just as the news of his “fiasco” is released. 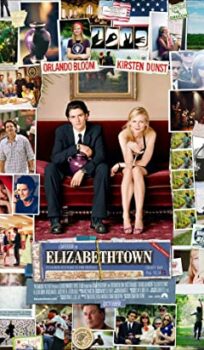