Michèle’s (Isabelle Huppert’s) assailant is her across-the-street neighbor, Patrick (Laurent Lafitte).  She discovers it the second time he breaks into her house and, while he attacks her, she manages to wound him with a pair of scissors and pull off his ski mask.  However, even though she chases him away, she doesn’t press charges.

Kevin (Arthur Mazet) was the one who created the computer animation of Michèle being raped by the monster, instead of Kurt (Lucas Prisor).  Yet, she figures out he was not the rapist when she makes him drop his pants and she notices his penis is not circumcised (obviously, Patrick’s was); she also takes no further measures against him.

After going to visit her convicted father -only to find out he had killed himself, presumably out of guilt and shame-, on her way back, Michèle has a car accident; she reaches out to friends by phone, to no avail.  She then calls Patrick, who comes and assists her.  Later, they engage in repeated scenarios where she willingly allows him to rape her because she figures out he cannot perform otherwise and he gets to have her due to a twisted infatuation.

Matters come to head at a company party, where Michèle confesses to her friend and partner Anna (Anne Consigny) she was the one sleeping -although not anymore, at that point- with Anna’s husband, Robert (Christian Berkel); then, when Patrick drives Michèle home, she lets him know she will tell the Police about the rape, which infuriates him.  After dropping her off, he breaks in once more and tries to have his way with her; but Vincent (Jonas Bloquet) -Michèle’s son- suddenly appears behind them and bludgeons Patrick; mortally wounded, he manages to get up, remove the ski mask and look at Michèle -who looks recomposed and cold- asking “Why?”, before falling dead to the floor.

Afterwards, things somehow get better for Michèle; she improves her relationship with Josie (Alice Isaaz), Vincent’s girlfriend -he, himself, seems a lot more matured and focused in life-.  Patrick’s widow, Rebecca (Virginie Effira), moves out of the neighborhood and, before leaving, wishes Michèle well and thanks her -she obviously knew about Patrick’s sexual perversion and that they were involved, but did or said nothing, since it seemed to keep him appeased-.  Also, Anna, having divorced Robert since, makes ammends with Michèle and considers moving in with her. 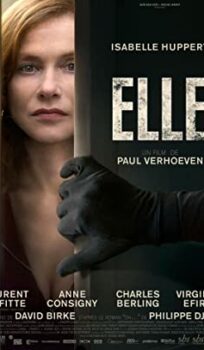