Elmer is a traveling salesman.  He is a natural public speaker.

Elmer is in a bar on Christmas eve, when some missionaries enter to request donations. They are rebuffed and are leaving. Elmer grabs their collection basket and starts lecturing the bar patrons to donate. He starts off mocking the missionaries, but ends up getting a lot of money for them.  He realizes he has a gift for getting people to give money like this.

He hooks up with Sharon Falconer, who has a traveling revival show.  Elmer does great and he and Sharon are a superb team.  However, Elmer is a big hypocrite.  While preaching the gospel, he spends his free time drinking and womanizing.

They decide to try to move up from small towns to doing a big city revival.  In the city, it is not going well as the newspapers are against them.  Elmer breaks up a few saloons with axes as a publicity stunt (this is during prohibition).  It goes over well, and Elmer brings along the press when he goes to break up a bordello.  However, unknown to Elmer, Lulu is there.  Lulu is a preacher’s daughter who was caught in the act with Elmer and thrown out by her parents.  She is now a prostitute.

She goes to the press and exposes Elmer.  This ruins their revival show.  Elmer goes to confront Lulu. He finds her being beaten up, and defends her, beating up the guy.

In spite of everything, Lulu still loves Elmer. She goes back to the press and recants, saying it was all a frame up.

Now, Elmer and Sharon and the revival are back bigger than ever.  They hold a huge tent revival with a big crowd. A carelessly thrown cigarette starts a fire, and the tent goes up in flames.  Sharon dies in the fire.

The manager wants Elmer to continue on his own.  Elmer says no, he is done with preaching. 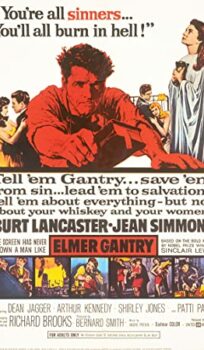