The film depicts the meteoric rise of the King of Rock and Roll, Elvis Presley (Austin Butler), as well as the relationship between him and his manager, Colonel Tom Parker (Tom Hanks).

Parker was an undocumented Dutch immigrant who became a grifter working at a carnival before setting his sights on managing Elvis after hearing him singing on the radio. Elvis, influenced by black musicians, joins Parker, along with his parents Gladys and Vernon. Although Elvis proves to be a hit with a young crowd, especially women, older parents, and politicians rally against him, seeing his sexual dance moves as indecent and wanting to put him in jail. Parker attempts to get Elvis to clean up his image, but Elvis refuses to be told how to act. To avoid jail time, he serves overseas in Germany, which puts such stress on Gladys that she drinks herself to death, devastating her son.

Elvis meets and falls in love with Priscilla Wagner, and they get married and have a daughter, Lisa Marie. Elvis makes his comeback by starring in films and creating more music with the help of his entourage. However, Parker controls much of what Elvis does and takes a 50% cut of his earnings. When Elvis wants to perform internationally, Parker refuses to allow it to avoid making his undocumented status known. Parker makes Elvis perform at the International Hotel in Las Vegas for more than five years, which drives Elvis to alcoholism and pill addiction and causes Priscilla to leave him.

By the mid-70s, Elvis’s health has gone into severe decline, and he has gained significant weight. He dies of a heart attack at the age of 42. News of Parker’s abuse of him is made known after his death through a series of lawsuits, and Parker spends the last years of his life alone and disgraced. Elvis is still known as the best-selling solo artist of all time, and his music continues to leave a massive impact in the present. 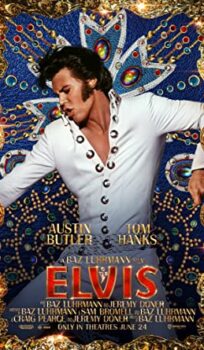