The Americans drop the atomic bombs on Japan, thus forcing the end of World War II (there are no depictions of atomic blasts; instead, an inferrence by Jim (Christian Bale) about a blinding, never-before-seen, Heavenly-like light he saw in the sky).  The camps of imprisonment are terminated, and all prisoners are seen fleeing from them.  Basie (John Malkovich) and Frank (Joe Pantoliano) pass by Jim, as Basie asks:  “Hey, kid, want a Hershey bar?”, and Jim answers: “Yes, please, Basie”, with a vacant expression.  Jim DOES toss him a Hershey bar, which indicates the Americans are nearby, looking for potential survivors.

Then, Jim rides his bike onto one of the barracks, and sees a freezer that crash-lands on the roof and bursts, full of food supplies.  He cheers upon this and rides off carrying a can of milk; but then, a few moments later, he comes upon a group of soldiers, and turns over his can, exclaiming, in a whisper: “I surrender!”.

He is taken to a site where nurses from the Red Cross are returning missing children to their parents, who have come to claim them.  Suddenly, Jim’s own parents see him (he doesn’t recognize them, because his ordeal at the concentration camp had visibly broken him down), and his mother calls for him.  When he turns around, he stares upon them, and, slowly, his memories come back, and he lovingly embraces his mother, as his eyes close, in a signal of joy and relief.

The movie ends with visuals of people cheering for the end of the war, and Jim’s suitcase, abandoned, floating over the waters of the river, as a sign of a harrowing memory left behind 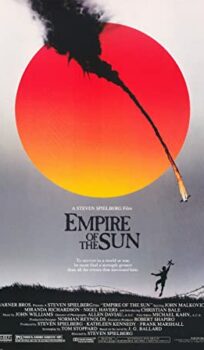