Robert (Patrick Dempsey) breaks the poison apple spell on Giselle (Amy Adams) with a kiss after Prince Edward (James Marsden) tries and fails. Queen Narissa (Susan Sarandon), angry that her plan has failed, changes into a dragon, grabs Robert and takes him up the Empire State Building. Giselle rescues Robert, and Queen Narissa falls to her death.

Robert’s fiance Nancy (Idina Menzel) sits on the floor of the ballroom with one of Giselle’s left-behind shoes afterwards-and Prince Edward notices, and puts the shoe on her foot, which fits perfectly.

Robert, Giselle, and Robert’s daughter Morgan (Rachel Covey) stay in the real world and open a fashion design house, along with Robert’s reformed servant Nathaniel (Timothy Spall), who writes a best-selling self-help book about “defeating the evil queen within”. Prince Edward and Nancy get married in the fairy tale world of Andalasia (with the ceremony briefly interrupted by Nancy’s iPhone ringing).

And you know the final words of course….”And they all lived happily ever after”. 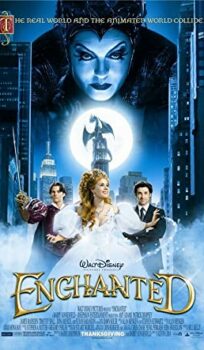