Adam’s dopplganger, the actor Anthony, confronts Adam (Jake Gyllenhaal) and accuses him of sleeping with his pregnant wife. Anthony demands Adam’s clothes and car to go have sex with Adam’s girlfriend to reciprocate, saying that after that he will disappear from Adam’s life. Adam complies. While Anthony goes to pickup Adam’s girlfriend, Adam goes to Anthony’s wife. It seems she knows Adam isn’t Anthony but still tells him to “stay” and initiates sex with him.

Meanwhile, Adam’s girlfriend notices Anthony’s wedding ring tanline, flips out and walks out. Anthony drives her somewhere, they fight in the car, Anthony crashes the car, presumably they’re both killed.

The following morning, Adam seems to fall into his new role as Anthony, wearing Anthony’s cloths and pocketing his key to an underground sex club seen in the beginning of the film. Adam goes to talk to his/Anthony’s wife in their room, and as he walks into the room he sees a giant tarantula cowering against the wall. The movie ends with Adam looking at the tarantula, not scared at all, slightly bemused, a hint of a smirk on his face.

Interpretation: The movie is filled to the brim with symbolism, subtle details (mainly in Jake Gylenhaal’s performance of Adam and Anthony’s very different personalities), recurring themes and surreal imagery.

Basically Adam and Anthony represent different parts in the psyche of the same person. Most of the events of the film probably take place solely in AdamAnthony’s mind. The two parts – the bookish, reserved, introverted Adam; and the masculine, aggressive, sexual Anthony – represent AdamAnthony’s loyalty and commitment to his pregnant wife struggling against his sexual desires and tendency to infidelity. The Spiders seen throughout the film are possibly the manifestation of how women dominate AdamAnthony’s mind.

The ending may symbolize AdamAnthony “killing off” the Anthony part of him, finally committing himself to one, huge tarantula-wife; or possibly him coming to terms with his internal struggle against his desires and not being fulfilled by married life. 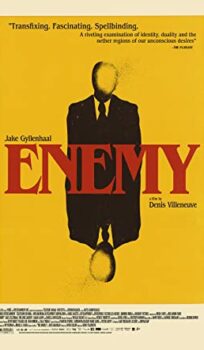