Enola Holmes (Millie Bobby Brown) is trying to establish herself as a professional detective but cannot seem to escape the shadow of her more famous brother Sherlock (Henry Cavill). She is found by a young girl named Bessie, who asks Enola for help in finding her foster sister Sarah Chapman. With help from Sherlock and Tewkesbury, Enola is on the case.

Enola learns that Sarah has uncovered a horrifying truth that girls at the match factory where she and Bessie work were dying from what was allegedly typhus, but is actually phosphorus from cheap match tip materials that are poisonous. Enola initially suspects William Lyon, son of the factory’s owners, but he, along with another foster sister, Mae, are found murdered. Enola is pursued by Superintendent Grail, a man of the law with dishonest intentions. He arrests Enola on the charge of Mae’s murder, but she is broken out when Sherlock seeks help from their mother Eudoria and her companion Edith.

Enola finds out that a young woman named Cicely that was working with Tewkesbury is Sarah, and that William was her lover trying to help expose the match factory. The heroes are led to the Paragon Theatre, where Sherlock shows up since the blackmail case he has been working on is connected to Enola’s case. Grail and his men confront the heroes, and Enola causes Grail to be killed when he gets caught in a hook and is pulled up to have his neck broken by a wooden beam. Lord McIntyre, who worked with William’s parents, shows up, and it turns out that his secretary, Mira Troy, AKA Moriarty, is the true mastermind, having hoped to blackmail McIntyre and the Lyonses, only for William to get involved, so she hired Grail and had William and Mae killed. Moriarty is arrested, but McIntyre seemingly escapes justice by burning the evidence of the girls’ names who were killed by the factory’s conditions.

With help from Tewkesbury, McIntyre is arrested, but Moriarty escapes custody. Enola continues to try and make a name for herself, separate from Sherlock, and she begins a relationship with Tewkesbury. Meanwhile, Sherlock meets a young man hoping to be his flatmate – Dr. John Watson. 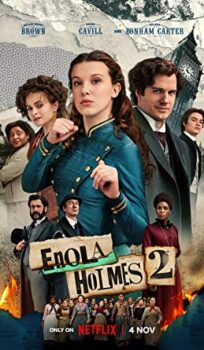