It is Tewkesbury’s (Louis Partridge) grandmother (Frances de la Tour) who was behind the murder attempt, in an effort to prevent him voting for the reform bill that would give women the right to vote. Sherlock (Henry Cavil) also figures this out and goes to Scotland Yard to report it, only to be informed that his sister Enola (Millie Bobby Brown) has already beaten him to the punch. As Sherlock leaves the building, he gives a crack of laughter.

Tewkesbury joins the House of Lords and his vote allows the reform bill to pass.

Enola finds a message in the newspaper, supposedly from her mother in answer to her own. She figures out that it was likely Sherlock who placed it. She goes to the meeting but in disguise. Sure enough Sherlock and Mycroft are there, but she does not approach them. Sherlock suggests he could become Enola’s guardian. The two men leave. While Sherlock realizes Enola is there, he does not approach her.

Enola returns to her lodging house to find her mother (Helena Bonham Carter) there. Her mother says she left to make a better world for Enola and is proud that Enola managed to make that world for herself but without violence. The two hug. 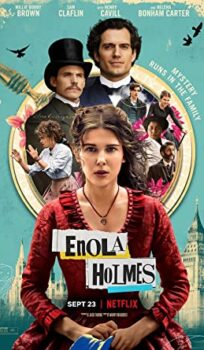