This movie revolves around three central characters and their personal reasons for going to a martial arts tournament. Mr. Lee, Mr. Roper and Mr. Williams:

Mr. Lee’s Story:
Mr. Lee (Bruce Lee), is a well known well respected Student/Teacher, who enters for 3 reasons: A government agency represented by a man named Braithwaite (Geoffrey Weeks) who suspects that the tournament holder Han (played by Shih Kien and voiced by Keye Luke) is using the tournament to front his drug selling operation and looking for new recruits. Since Lee was invited to fight in the tournament, it was the perfect opportunity for the agency to hire him to find evidence.  Lee is already pissed off at Han because he was a Shaolin student and defected to use his skills for personal gain and corruption. Along with the fact that Han’s right hand man O’Hara tried to rape his sister Su Lin (Angela Mao) causing her to commit suicide. He agrees to the mission and sets sail to Han’s island.

Mr. Roper’s Story:
Mr. Roper (John Saxon) is a Expert martial artist, but a poor gambler, during a golf game he is ambushed by 2 thugs (one of which is Pat E. Johnson) demanding the money he owes a mob boss named Freddy a ton of money plus interest. He fights them off without breaking a sweat and decides to go to the tournament to hide from them until he has the money to pay them back.

Mr. Williams’ Story:
Mr. Williams (Jim Kelly) is a master of Karate and a civil rights activist. He gets attacked by two racist cops, but fights them off easily. He goes to the tournament on the run from the law.

The Interaction:
Williams gets on the boat fast and is met by Roper. It turns out they been friends since they were soldiers in the Vietnam war. They Lee among other challengers including a New Zealander named Parsons (Peter Archer).  Roper loses a $100 bet to Lee on a praying mantis fight and it strikes a rivalry between them.  Parsons harasses the luggage carrier until Lee shows him “The art of fighting without fighting” by tricking him into going on a lifeboat in the water and holding the tether to it distance of the boat.  When they arrive on the island Roper is smitten by Han’s secretary Tania (Ahna Capri). They are all greeted by Han and treated to a dinner and show the day before the tournament. It was then and there that Roper tells Lee not to spend the money he won because Roper plans to win it back.  The show contrasts of 3 of Han’s servant girls throwing apples in the air and darts in the apples before a member of the audience catching the apples. Among the 3 is Mei Ling (Betty Ting Pei) another operative Braithwaite sent to the island; Lee catches her dart.  That night the 3 fighters are separately in their sleeping quarters. Williams is first greeted by Tania who offers him one of 6 prostitutes. Williams on the other hand picks them all.  Tania then goes to Lee’s room; Lee takes advantage of this and asks for Mei Ling to come to his quarters. Last but not least is Roper, but he implies that he wants Tania. Lee Learns from Mei Ling that each servant girl disappears and Mei Ling fears the same fate.

Round 1:
Williams and Parsons faces off first while Roper and a referee make bets on the side. After Williams beats Parsons, Roper is up next and instructs Williams to keep the action going and specifically asks Williams to bet 8 to 3 that Roper wins.  Roper fakes loss 3 times and then wins, much to the referees disappointment.  They all retire to their quarters for the night: Roper is getting a back massage from Tania, Williams is going outside for some Kata, and Lee dressed in black and looks around the island for any evidence of Hans drug cartel. Lee finds a secret room but before he can investigate, he fights off the guards before they can identify him.  Williams catches him sneaking back in his quarters but doesn’t recognize him due to the black clothing.

Round 2:
Han is discussing that going outside at night is forbidden and who it was wasn’t important at this time. What was important was that his guards failed to subdue or identify the spy that violated those rules. So he tests their loyalty he faces them off against his left hand man Bolo (Bolo Yeung) a sadistic musclebound man who mercilessly kills the scared guards. It is now Lee’s turn to fight and his opponent is O’hara, whom he easily defeats. O’Hara in a rage attacks Lee with broken bottles, and Lee reluctantly and brutally killed him.  Shocked at the death of O’Hara and disappointed at his treachery, Han calls off the tournament for the day and asks Williams to his office. He accuses Williams of what Lee did last night but Williams denies it. They fight and Han beats him to death with his steel prosthetic hand. He then talks to Roper while at the same time reveals his intention to use the tournament fighters as new recruits for his drug operation. He also reveals that the servant girls are being tested with the drugs and slowly makes them dependent on the drugs. There is also a prison where a numerous amount of people are kept against their will.  He offers to wipe out Roper debts in America in exchange for Roper working for him. Han then shows Williams’ corpse to Roper implying that he will kill if he refuses.  At night Lee again sneaks into Hans secret room and sends a telegram to Braithwaite so the agency can deal with it from now on. He unknowingly sets off the alarm and fights off and kills the guards. He tries to make his escape and is trapped in a room where Han and his guards arrest him. Han was disappointed, because he was gonna ask Lee to join him.

Final Round:
Han asks Roper to test his loyalty by killing Lee in a fight. Roper knowing what Lee is capable of, refuses so Han decides that Roper fights Bolo instead. Roper successfully beats Bolo to death after a lengthy fight. Han enraged, calls all his students and guards to kill Lee and Roper, who manage to fight them off brilliantly. This fight turns into an all out war when the men that Han imprisoned are freed by Mei Ling to join in on the fight. Han tries to escape while fighting off people with his claw hand; Lee chases him into his house and fights him. Lee turns out to be the far superior despite bing cut numerous times by Han’s claw and dodging a spear being thrown into a wall. Han escapes through a secret passage in the wall and Lee follows him. The room turns out be a hall of mirrors confusing Lee as Han continues to slice him. Finally having enough, Lee smashes all the mirrors and pursues Han. He finds Han and side kicks him into the wall the spear is in killing him. Lee then leaves him spinning on the wall door.  Outside during the aftermath, Roper and the prisoners round up Han’s men. Unfortunately for Roper, Tania died in the middle of the war. Lee steps out and gives Roper a thumbs up. Just then helicopters carrying fully armed troops working for Braithwaite arrive too late to the Island, much to Lee’s annoyance. 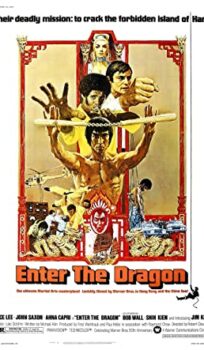