Peter, Susan, Lucy and Edward (Adam Campbell, Faune A Chambers, Jayma Mays and Kal Penn, respectively) use a universal remote control to “pause” the army of the White Bitch (Jennifer Coolidge), and then slaughter them while they are frozen. The four are crowned kings and queens of Gnarnia, where they live to an old age. One day, while urinating in the forest, they find the wardrobe that originally led them to Gnarnia, and the four return to Willy’s (Crispin Glover’s) chololate factory. As a hairy, nearly naked Eastern-European man welcomes them back to a happy ending, they are crushed to death by a water wheel carrying Captain Jack Swallows (Darrell Hammond). 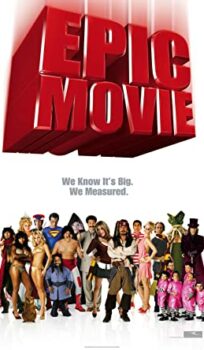