David, Susan, Jim and Vickie go out into the woods to look for a Dr. Waterman when they stumble upon an ancient book of supernatural power (shades of Evil Dead!).  Asmodeus (King of Demons disguised as a park ranger) sends monsters to kill our heroes leaving only one survivor, David.  A monster informs David that he is dead in one year and a day which sends David to the nut house!  David takes solace in his cross but……a year and a day later, the doctors decide that David must realize that it is just a cross and take it away from him.  David freaks out and we then see what looks like Susan approaching the asylum. 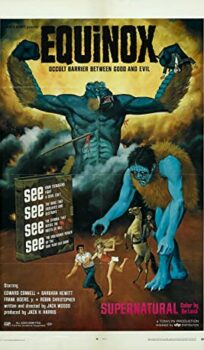