Based on the play by Peter Shaffer

Richard Burton stars in what is perhaps his finest performance, as Dr. Martin Dysart, a tormented psychiatrist in Great Britain. His task is to treat Alan Strang (Peter Firth), a 17-year-old who blinded six horses with a metal spike. Alan is remanded to the hospital where Dysart works instead of being sent to prison, which his judges wanted to do on the spot. Why did he commit such a horrific crime, especially against animals he loved to an obsessive degree?

We meet Alan’s parents, Dora (Joan Plowright in an equally-amazing turn) and Frank (Colin Blakely). Dora is a staunch Christian, Frank an adamant atheist. Conflicted by his parents’ values, Alan develops his own horse-based religion when he is forbidden to have a disturbing picture of Jesus above his bed. Also, from riding a horse, he gets his first taste of freedom from over-protection and social convention. He worships Equus, a god who lives in all horses, and is wholly devoted to his self-made faith.

In the meantime, Dr. Dysart is torn between his duty to cure Alan and his desire to experience the same kind of passionate worship that Alan does. Hesther (Eileen Atkins), who sent Alan to the hospital in the first place, reminds Dysart to keep his priorities straight. He’s not convinced. Rather, he is haunted by his inability to pinpoint the source of Equus in Alan’s mind and in his own. If he can’t do so, why is he still a psychiatrist?

In the end, Alan confesses (under the influence of an aspirin, which he thinks is a “truth drug”). When he tried to bring a local girl to the stables, Equus’ temple, to hook up with her, he couldn’t. He felt guilty for liking her more than his horse gods, and sent her away. Then, saturated with shame, remorse and fear, he blinded the horses because “My God hast seen!” Never again, Alan thinks, will Equus be able to see or judge him.

Dr. Dysart gives Alan a sedative, then presents his final soliloquy. Alan will never gallop anymore, for Dysart will make him well, at the price of Alan’s ecstatic worship. Alan Strang (Strange with the “e” taken off) will become a normal and productive citizen after he receives treatment.

Dysart has literally and metaphorically traded places with Alan, taking on the psychological burden of Equus – and the passion – in order that his patient may be cured. “There is now in my mouth this sharp chain,” Dysart says, referring to Equus’ mouth chain and bridle, “and it never comes out.” 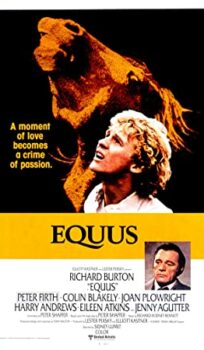