Short pooper:
Ernest and Celestine are able to revindicate themselves by saving the Judges of their respective trials from the fire that destroys both the Mouse World and Bear World Courthouses. In turn, the Judges acquit them and let them both go; the two friends tearfully and joyfully embrace as they reunite and, in the end, are bickering over the possibility of creating an illustrated book about how they met.

Longer version:
Unbeknownst to them, Ernest and Celestine’s apparent “disappearance” (in reality, they just decide to abscond from the oppressiveness of the society at large, which demanded “they followed everyone else’s pre-determined path,” as opposed to what they each wanted to do in life, by hiding in Ernest’s remote cabin for the winter) kickstarts a collective situation of unrest in which the lower classes declared being tired of the abuse from the upper ones and stood up against them.

In the Spring, however, after a long pursuit, both the Bears and the Mice get a hold of the pair and arrest them. Both Ernest and Celestine end up standing trial simultaneously in a double-Courthouse for the respective worlds. Through the procedures, they are both subjected to the ridicule and incomprehension of the respective Judges and the overall attitude of the common folk present, based on the collective prejudice of everyone and their own refusal to give in and give up a friend. Suddenly, a fire breaks out and almost immediately engulfs the entire Courthouses. While the citizens run for their lives, both Ernest and Celestine selflessly sacrifice themselves and rescue the Judges from the mayhem.

Once everyone is safe, and both Courthouses have crumbled to the ground, the Judges shamefully realize and admit they have been too long, too unfair to beings who didn’t mind risking their own lives to save them, while the rest of the populace -whom they always thought they had under control- only cared about saving their own skins. And while they cannot comprehend the unbreakable friendship between this mouse and this bear (always believed and expected to be mortal enemies, as per societal conditioning and expectations), the Judges drop all the charges and release Ernest and Celestine to their free will and desire to leave together. The two dear friends reacquaint and tearfully reassure their bond as they embrace at everyone’s sight -and the image turns to that one of a hand-drawn storybook illustration-.

The movie ends as Ernest and Celestine, now living together at Ernest’s house, discuss creating an illustrated story based on their friendship and how they met… at which point Celestine protests Ernest’s intentions of including the details of how he almost ate her, and he playfully declines to do so, in favor of a more favorably displayed beginning. 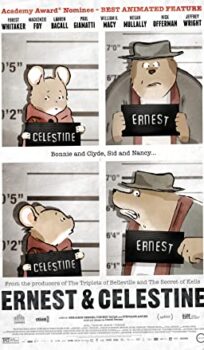