After a bad drug shipment, the Essex Boys led by Jason Locke (Sean Bean) threaten to kill John Dyke (Tom Wilkinson) unless he comes up with the money to repay for the drugs and bad reputation.  He gives Jason one better; the location of a huge drug shipment worth millions.  As they drive out to collect, John’s right hand man Henry arrives with hidden shotguns and kills Jason and his two main partners leaving driver Billy Reynolds AKA Billy Whizz (Charlie Creed-Miles) alive as a witness.

Later, Billy comes to comfort Lisa Locke (Alex Kingston) and they begin a sexual relationship; Billy not knowing that John is obsessed with her.  John and Henry attempt to kill Billy but he gets away taking a huge drug shipment with him.  Thinking they can run away, he goes to find Lisa who makes him recuperate in a hotel.  While she is gone he realizes that Lisa set up Jason to be killed.  He hears a cell phone and she is on the line telling him goodbye. Thinking John is outside to kill he throws out the drugs and pleads to John to let him live.

But it is not John but the police who Billy surrenders to.  Seeing Lisa at a phone booth he figures it all out.  Lisa, who was tired of Jason’s infidelities and beatings AND John’s obsession over her decided to get them both out of the way so she could climb the criminal ladder with Perry Elley.  She makes John kill Jason and let Billy live.  Then when Billy came with the drugs she called the police.  Billy would likely get ten years for the drugs unless he had a bargaining chip; being the sole witness to the triple murder of Jason and his cohorts.  Billy chuckles in shock as he is taken away while Lisa gets off Scot free. 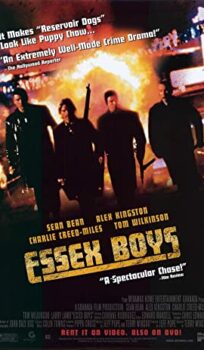