The movie has an episodic structure (albeit with no labeling captions), showing the ordeal of the main character, real-life author Solomon Perel, from his separation from his family in his teenage years -at the dawn of World War II-, passing by the time he spent at a Soviet orphanage and his distinction within the Nazi ranks by pretending to be a German to not become a casualty, until his definitive survival of the Holocaust and emigration to Israel, after the war.

In the final days of the war, as the Soviets narrow on the dwindling Nazi troops, “Jupp”/Solek (Marco Hofschneider), who has been sent to the front to fight, finds himself unable to shoot and kill any of the soldiers -who look just as young as he does- and, instead, decides to run off with the intention of surrendering.  He is captured by a group of Soviet soldiers and tries to explain himself as Jewish and having hidden amongst the Nazis to survive, but they don’t believe him because “he looks too clean and well-fed” (he is shocked by pictures of tortured, emaciated and brutally murdered Jewish people shown to him, since he had no idea any of that had been going on, instead of believing what he was told all along, that “they’d all be shipped to Madagascar”).

A Commander hauls Solek off and gives a concentration camp survivor the task to shoot him dead.  As it is about to happen, someone Solek’s attention, and it turns out to be his older brother Isaak (René Hofschneider), who had also been a prisoner of that same camp.  They tearfully and joyfully reunite and embrace.

In voiceover, Solek narrates how his brother told him the entire story of how their parents were killed shortly after they all broke apart and Isaak ended up in the ghetto and, eventually, in that concentration camp, expressing his guilt over being oblivious about that catastrophe.  Isaak also compels him to not tell his story to anyone because of how unbelievable it is.

Starting from this point, Solek proudly embraces his Jewish roots, leaving the lies and horror of the War behind.  Donning a camp uniform, he is seen walking away while helping Isaak.  He narrates about later having emigrated to Palestine (which would become Israel) and having had a family of his own.

The movie ends with the real Solomon Perel chanting the “Hine Ma Tov”, a traditional Sabbath hymn about the beauty of brothers helping each other. 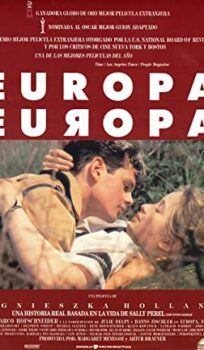