Pooper:
Nami, the only survivor, seemingly kills Daisuke and his mutant twin Hideki. But several days later, she receives a present suggesting Daisuke may still be alive and suddenly gives birth to Hideki (who seemingly transplanted himself inside her during their battle).

Long Ending:
TV reporter Nami Tsuchiya (Miyuki Ono) receives a videotape that appears to contain a snuff film intercut with images of her news show. The tape also provides directions to where the film was shot. Thinking that an investigation would bring in big ratings (which she needs to compete in a male-dominated industry), Nami decides to go to the location.

Nami and her crew – Rei (Hitomi Kobayashi), Kondou (Masahiko Abe), Rya (Eriko Nakagawa), and Masako (Aya Katsuragi) – journey to the location where the film was made. It turns out to be an abandoned secret military base. As the crew split up and investigate, they are stalked by a masked man who is keeping another man chained to a wall. While searching, Nami meets a man named Daisuke (Yûji Honma), who is looking for his brother Hideki. Eventually, Rei is murdered through supernatural means by a masked killer.

Nami and the rest of the crew reunite in a large warehouse where the killer reveals Rei’s corpse to them. They all flee in different directions. Nami is knocked out, Masako is captured by the masked murderer, Kondou falls through a trap door, and Rya flees to their vehicle. As Rya tries to drive away, she is attacked by the crazed man who was earlier shown to be chained up by the killer. The crazed man begins sexually assaulting Rya. As they struggle, he explains that he’s been held captive, that the murderer has killed his girlfriend (presumably the woman killed in the snuff film), and that the murderer is actually two people with the same mind. The crazed man and Rya are then murdered by the killer.

When Nami awakens, she finds Kondou’s decapitated head. She is found by Daisuke, who offers to help her leave the compound. Nami and Daisuke are briefly separated and she sees a TV broadcast showing Masako tied up inside a locked room. Nami finds the room and works on opening the door, unaware that the door handle is connected to a pulley that will shoot a crossbow at Masako once the door is opened. Nami opens the door, but Masako manages to move her head just enough to avoid being hit by the crossbow bolt. Nami runs towards Masako but stumbles over a tripwire that causes a blade suspended from the ceiling to fall and kill Masako. The masked killer then appears and attacks Nami before Daisuke reappears and chases the killer off. The pair find a secret passage to the exit. Daisuke tells Nami to flee while he returns to the compound to continue looking for his brother.

Nami considers fleeing but decides to return to seek revenge on the killer. She eventually finds Daisuke seemingly talking to himself and disposing of the corpses of her crew. Nami accuses Daisuke of being the killer and threatens to shoot him. Before she can do so, Daisuke passes out and Daisuke’s mutant twin Hideki claws its way out of his chest. Hideki is a murderous mutant who possesses supernatural powers including (but not limited to) telekinesis and pyrokinesis. Hideki attacks Nami and almost kills her before Daisuke regains consciousness and forces Hideki back inside his chest. Not wanting to live this way anymore, Daisuke sets himself on fire. Although maimed, Hideki isn’t dead. Hideki takes control of Daisuke’s scorched body and grabs Nami by the throat. She is able to stab him, which causes Daisuke/Hideki to fall out the window, seemingly to their death.

The film jumps ahead to where Nami has recovered other than scars left on her throat from where she was strangled. She is told by the police that the bodies of Daisuke and Hideki were never found. One night a mysterious package is delivered to her. Indide, Nami finds a lighter that belonged to Daisuke (suggesting he is not dead). Nami then collapses in pain to the floor where she goes into supernatural labor. She then gives birth to Hideki (seemingly transported inside her body when she was being strangled). Once born, Hideki turns to Nami and says “mama.” 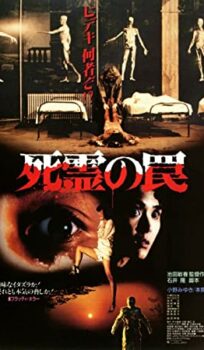