Pooper:
Mia is the only one to survive the night and she manages to kill the Deadite with a chainsaw (though she loses her hand in the process). Mia walks triumphantly off into the woods, but the Necronomicon remains unharmed in the cabin.

Long Ending:
The movie starts with a girl being abducted in the woods. When she awakens, she is tied to a post in the basement of a cabin, surrounded by a cult of people reading from the Book of the Dead – the Necronomicon. The girl’s father is there and she pleads for his help. Instead, he tearfully douses her in gasoline. The girl immediately changes into a demon (a Deadite) and promises to eat their souls before the dad lights her on fire (thus purifying her soul).

We cut to some point in the future. David (Shiloh Fernandez), his dog Grandpa, and his girlfriend Natalie (Elizabeth Blackmore) show up at the cabin and meet David’s old friends Olivia (Jessica Lucas) and Eric (Lou Taylor Pucci). They are all there to support David’s sister Mia (Jane Levy) as she tries to quit her drug habit cold turkey. It turns out the cabin belongs to Mia and David, whose mother had passed away in a mental asylum.

The group eventually journeys into the cellar where they find the Necronomicon wrapped in barbed wired. Despite many warnings in the book to leave it alone, Eric reads a passage that awakens the evil Deadite spirit. Mia begins seeing the spirit and in a brutal rape scene, is possessed by it. Of course, nobody believes Mia’s claims of a demonic presence, even after David’s dog is found beaten to death.

Soon, a fully-possessed Mia attacks the entire group (puking blood down Olivia’s throat) before being locked into the cellar. Unfortunately, Olivia also becomes possessed (once infected, the sick become demonic servants of the Deadite) and attacks Eric before he manages to kill her. The Deadite, assuming Mia’s human form, tricks Natalie into coming close enough to infect her. Eric tries to burn the Necronomicon, but it is resistant to fire.

After a struggle between the now-demonic Natalie and the two men, Eric confesses to David that this is all happening because he read from the Necronomicon. If the Deadite manages to possess all five of them, it will rain blood and the Deadite’s true form will walk the Earth. The only way to defeat the Deadite is to purify Mia’s soul. There are only three ways to do so – burning Mia on a stake, burying her alive, or dismembering her.

David, having received far less injuries than Eric, begins to douse the cabin in gasoline to burn Mia inside. Realizing that Mia’s soul is still alive somewhere within her body, he decides instead to capture her and bury her alive – building a homemade defibrillator to bring her back once she is purified. He and Eric confront Mia in the basement and after a struggle in which Eric is killed, Mia is captured and buried alive. David successfully brings Mia back using the defibrillator.

Before they can leave, however, a possessed Eric attacks and mortally wounds David. Before he dies, David shoots the gas can and destroys himself and the bodies of his former friends. Unfortunately, David’s death is sufficient to cause blood to rain down and the Deadite’s true form to emerge from the ground.

Mia struggles with the demon, eventually losing her hand in the struggle. Mia manages to cripple the Deadite with her chainsaw, before killing it by cutting it in half. The Deadite’s body sinks into the ground and the blood stops raining down. We watch as Mia walks triumphantly towards the morning sun, chainsaw in tow. The camera then zooms in on the Necronomicon remaining unharmed at the site of the cabin.

Post Credits Scene: We see Ash (Bruce Campbell), the hero of the first Evil Dead trilogy, turn to the screen and say “groovy” (one of his catchphrases). This hints at a future movie involving the further adventures of Ash. 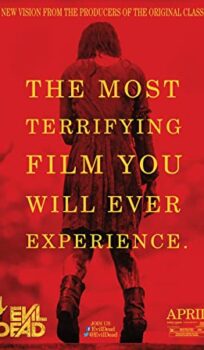