Dr. Frankenstein (Peter Cushing) discovers an earlier creation frozen in a glacier. It is revived but brain-dead due to a rifle shot to the head; now it just sits there and stares, catatonic. As a last resort, Frankenstein employs Zoltan, a scummy carnival hypnotist, to rouse the Monster. The plan succeeds, sort of: due to on-the-fly brain surgery the Monster is in constant agony and takes a strong liking to the bottle and, worse, will now only obey the commands of dirtbag Zoltan. The hypnotist uses the Monster for nightly runs of revenge, murder and petty theft, which royally pisses off Frankenstein. The doc shoves fire in its face and the Monster freaks out, breaking Zoltan’s spell. Zoltan is killed and the insane Monster goes totally berserk. Drinking a bottle of chloroform it mistook for booze, the Monster thrashes and staggers, starting a blaze that kills both it and the doc. Frankenstein’s doltish young assistant Hans and his hot deaf-mute girlfriend escape. 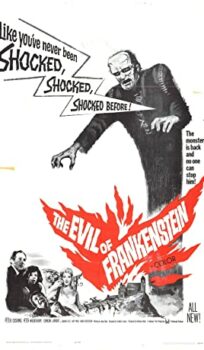